This has happened in past surveys also, say experts 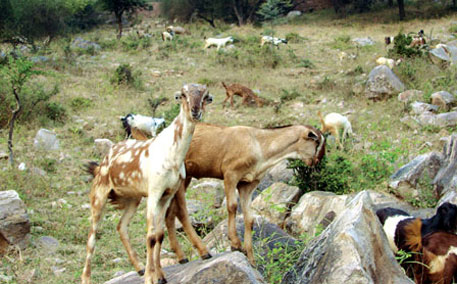 The figures in the 19th livestock census report and the recently released survey report by the National Sample Survey Office (NSSO) don’t tally. While the census report that was released this September shows that number of sheep and goats stood at 200 million in the 2012-13, the 70th round of National Sample Survey showed a huge decline in their number to 99 million.

Similarly, the census report shows the number of poultry at 729 million in 2012-13, while NSSO survey shows a huge decline in their number at 255 million (see table).

The 19th census of livestock started in 2012 and the results were announced in September 2014. The NSSO survey report was released in December.

The NSSO report, “Key Indicators of Land and Livestock in India”, also differs from census data on trends.
But at the same time, the census figures differ from NSSO data on trends. While the census figure was showing a marginal decline in the number of sheep, goat and pigs, NSSO survey indicated increase in their population in recent years.

Experts say that such mismatch of data on livestock is not new and that this was apparent in past survey reports also but that the ministry concerned never looked into the matter.

“There were several occasions when census and NSSO data were different, including in 1982, 1992, 1997,” says P S Brithal, principal scientist at the National Centre for Agricultural Economics and Policy Research (NCAP), New Delhi.

Another expert says timings of start of the census may have some effect on the figures. “The number of goats has not changed dramatically. The census started on October 15, 2010 and it was festival season when consumption of goats and the reduction in their numbers is inevitable,” says Kamal Kishore, coordinator, Rainfed Livestock Network, Anand, Gujarat.
Web edition Web edition News News News Rainfed Livestock Network PS Brithal NSSO National Sample … National Centre for … Kamal Kishore Down to earth 19th livestock census
Donate Now