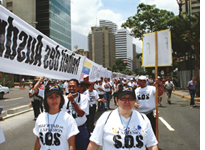 Venezuelan President Hugo Chavez has refused to renew the licence of a television channel regarded as an institution in his country, raising fears that the Venezuelan leader is fast turning despot.

Amnesty International, Human Rights Watch, members of the European Parliament, the us Senate and even Chile's Congress have denounced the closure of Radio Caracas Television (rctv), the oldest private television network in the South American country.

Chavez's detractors got more ammunition when the president included another opposition network, Globovision, among the "enemies of the homeland". But the closing down of rctv is a sad event for Venezuelans. Founded in 1953, it produced the long-running political satire program "Radio Rochela" and broadcast the first live-from-satellite images in Venezuela when it showed Neil Armstrong walking on the moon in 1969.

But after Chavez was elected president in 1998, rctv fell from favour. Controlled by members of the country's fabulously wealthy oligarchy, it saw Chavez and his "Bolivarian Revolution" as a threat.

It's most infamous anti-Chavez effort came during a 2002 coup to topple the president. For two days before the putsch, rctv pre-empted regular programming and ran wall-to-wall coverage of a general strike aimed at ousting Chavez. This stance earned it the ire of the Venezuelan president's supporters. "Would a television network that aided and abetted a coup against the us government be allowed to operate in that country? They ask.