Report released by US-based non-profit indicates that 2 billion people in the world suffer from hidden hunger, affecting their health and productivity 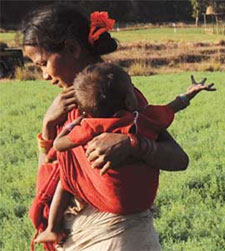 India has improved its ranking in the new Global Hunger Index report released by the International Food Policy Research Institute (IFPRI), a Washington-based global non-profit. The country has been ranked at 55 among 76 countries, above Bangladesh (ranked 57) and Pakistan, (also ranked 57). But Nepal and Sri Lanka are better placed than India in the index ranking.
The last GHI report appeared in 2005, in which India was ranked below Pakistan and Bangladesh.

IFRI analyses and records the state of hunger worldwide and highlights the regions where urgent action is needed. 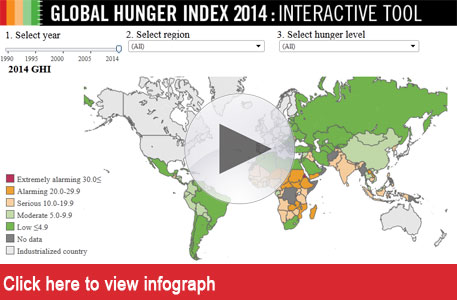 The state of hunger in developing countries as a group has improved since 1990, falling by 39 per cent, according to the 2014 GHI. Despite progress made, the level of hunger in the world is still “serious,” with 805 million people continuing to go hungry, according to estimates by the Food and Agriculture Organization of the United Nations, the report points out.

This year’s report focuses on another kind of hunger which is generally overlooked: hidden hunger.

Hidden hunger, defined as deficiency of micronutrients, is affecting 2 billion people globally, says the report. This shortage in essential vitamins and minerals can have long-term, irreversible health effects and by affecting people’s productivity; it can also take a toll on countries’ economies, says the report.

According to report, the highest GHI scores—and therefore the highest hunger levels—are in Africa, south of the Sahara and South Asia.

South Asia saw greatest absolute improvements since 2005. It saw the steepest absolute decline in GHI scores since 1990. Progress in addressing child underweight was the main factor behind the improved GHI score for the region since 1990, says the report.

According to report, India is no longer ranked second to last for underweight children. It is now 120th among 128 countries on child under-nutrition, an improvement from the 2009 report.

The index shows that India has been successfully dealing with the problem of underweight children, which shows a fall in GHI score to 17.8 from 24.2.

India’s GHI score declined by 26 per cent, or 6.4 points, between the 2005 GHI and the 2014 GHI, outpacing the drop seen in other countries in South Asia in the same time period. India now ranks 55 out of 76 countries, before Bangladesh and Pakistan, but still trails behind neighboring Nepal (rank 44) and Sri Lanka (rank 39).

Meanwhile, India is no longer in the “alarming” category. India’s hunger status is still classified as “serious”, according to the GHI.