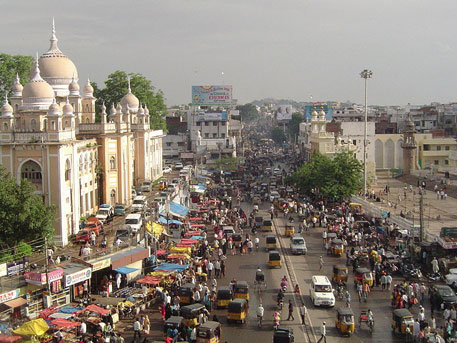 The most difficult and sensitive part in the bifurcation of Andhra Pradesh was deciding the status of Hyderabad, the capital city. The United Progressive Alliance coordination committee and the Congress Working Committee, while endorsing the carving out of Telangana from Andhra Pradesh, decided that Hyderabad will be common capital to both Andhra and Telangana for 10 years. The city is located in the heart of Telangana. Naturally, Telanagana people were demanding  that the city should be the capital of the new state. But most of the investments in Hyderabad were made by rich industrialists and business people from coastal Andhra.

People from Andhra, being under direct British rule, had access to better educational facilities. They also had better irrigation facilities set up by the British, and because of enhanced agriculture production, they had become an entrepreneurial class. Most of them migrated to Hyderabad and started industries and businesses.

Naidu and the rise of city's fortune

Hyderabad was a not-so-developed a city till 1996 when N Chandrababu Naidu, leader of Telugu Desam Party (TDP), became the chief minister of the state. Unlike the chief ministers before him, Naidu focused on attracting investments from within and outside the country. He spared no effort to make the city a globally known information and technology hub.

During this process, he even allowed the World Bank to assess the state government's policies and make suggestions to formulate new policies. Hyderabad soon became one of the most-sought after destinations of investors and international funding agencies. Naidu developed Cyberabad, an extension of Hyderabad known as hi-tech city, where all hi-tech industries could get established. Naidu even visited Bill Gates in Seattle. Later, Gates started a Microsoft development centre in Hyderabad. The US president Bill Clinton, too, paid a visit to Hyderabad.

Inspired by the international attention he received, Naidu released “Vision 20”, a roadmap for development for next 20 years, mainly of Hyderabad. It was prepared with the help of international consultancy firm,McKinsey. It included ambitious plans for investments and creating jobs.

Hyderabad became a city of opportunities and paradise for investors. A lot of foreign and domestic investments flowed into the city. Many from within the state and outside the state migrated to Hyderabad for making their fortune.

But the reforms cost Naidu dearly. Since the whole attention was focused on Hyderabad, rural Andhra Pradesh, especially Telangana, got alienated. In the 2004 election, TDP was routed. But Congress' Y S Rajasekhara Reddy, who came to power in 2004, took the development plans forward, based on industries. The city started expanding faster and more and more investors started coming in. During Reddy's tenure vast stretches of farmland around Hyderabad were given away to investors and industrialists. Hyderabad was expanding so rapidly that it had eaten into neighbouring districts like Ranga Reddy where farming had been the main source of living for people. Many of the deals are now under the CBI scanner.

Apart from being an IT hub, Hyderabad can be termed as the capital of drug industries and super speciality hospitals, big laboratories, hotels, business houses and national scientific research institutions. It is surrounded by backward regions. A good chunk of the state’s revenue is contributed by Hyderabad.

Had the United Progressive Alliance and the Congress Working Committee decided to keep Hyderabad as Union territory, it would have been a real problem for both Telangana and Seemandhra to develop new capitals. Now the issue will be sharing of revenue and natural resources.