I drink cola, therefore I am? 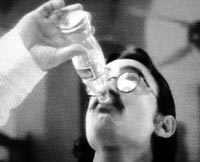 It was the year 1960. As the Democrat J F Kennedy and Republican Richard Nixon contested for us presidency, the Democrats came out with a poster of Nixon, with the phrase, "Would you buy a used car from this man?" Nixon eventually lost that election, but 12 years later, he did get his chance to prove how right the Democrats were.

If posters made public opinion, then the time is ripe for the question, "Would you learn family values from cola manufacturers?"

There are truths. There are lies. And then, there is advertising. Two months after a study by the Centre for Science and Environment (cse) found pesticide residues in leading soft drinks brands in the country, multinational giants Coke and Pepsi are engaging in ad campaigns that seek to turn lies and half truths into common sense, in the process breaking every rule of the book. (Yes, even advertising has its ethics.)

How about the refreshing truth? The prospect of dwindling sales has hit cola barons where it hurts the most. Ever since the cse report was made public, cola drinks have turned out to be neither the "real thing", nor the object of "dil maange more". An industry that has spent millions on enticing people into drinking carbonated water of assorted flavours, and has so far been successful at it, now has to justify the entire purpose of its being. A lot has been said about the bigwigs of Coke and Pepsi getting together in an unprecedented cause of solidarity, fending off the slings and arrows of outrageous fortune that has suddenly hitting them. When enemies become friends, surely, the crisis must be deep.

And how are they coping? Sulking. Mindgames. "If you wouldn't harm your family, why would we harm ours?" No glitter and glamour here. Instead, a series of Coke ads in daily newspapers sport joyful photographs of Coke executives and their families, with Coke bottles in their hands. It is up to the people to decide whether to fall for this charming picture of domestic bliss.

They have clutched at every straw that was available. PepsiCo had to withdraw, and apologise for, an ad from daily newspapers in which it reproduces Union health and family welfare minister Sushma Swaraj's claim that all soft drinks were within safety limits. And now, even as a Joint Parliamentary Committee (jpc) set up to look into the pesticide-cola issue is into its deliberations, a new Coke campaign has started on tv. The jpc has already commented on the unethical timing of the ads. "If the air is dirty, we should not breathe," Rani Mukherjee pouts in one. In another, stereotypical Bengali Babu Aamir Khan's wife rattles off that even Indian labs found Coke to be clean. Untrue, for even these labs (cfl, Kolkata, and cftri, Mysore) found pesticide residues.

Of course we should breathe, for if we don't, we die. It's called the nutrition-poison trade-off. One is yet to hear of someone who has died for want of cola. One wouldn't be surprised if they start saying, "I drink Cola, therefore I am".