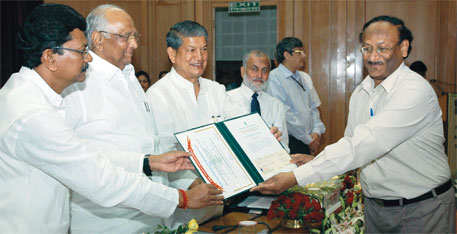 THREE years after the country’s first attempt to commercialise a GM crop ended disastrously, there is no satisfactory conclusion to the tale of scientific deception, regulatory carelessness and official indifference that has characterised the development of Bt Bikaneri Narma (BNBt) cotton. An inquiry committee tasked with finding out if the public research institutions involved in developing the desi cotton did, indeed, do so or whether it was just the MON531 event of Monsanto with which it was claimed to have been “contaminated” has stitched together a detailed report that exposes the many flaws and omissions in this prestigious project of the Indian Council of Agricultural Research (ICAR). But it leaves critical concerns unanswered (see ‘Troubling questions’).

The BNBt, known as the BNLA106 event, or the genetic transformation of an elite Indian genotype of cotton, was developed under the generously funded National Agricultural Technology Project (NATP) during 1999-2004. It was a collaborative effort that brought together the National Research Centre on Plant Biotechnology (NRCPB) in Delhi, the University of Agricultural Sciences in Dharwad (UAS-D) and the Central Institute for Cotton Research (CICR) in Nagpur, all top institutions in their own spheres. The project, however, was beset with serious shortcomings (see ‘Untangling India’s Bt cotton fraud’, Down To Earth (DTE), February 15, 2012).

For one, the scientist responsible for conducting molecular analysis of BNBt did not do so because, as the committee has discovered, he did not have the technical skills to carry out such studies. Ishwarappa S Katageri of UAS-D claims he was not even aware of any methodology to differentiate various events. Incidentally, he has been on the regulatory body Review Committee on Genetic Manipulation (RCGM) for years. Such DNA-based tests are mandatory to assess the purity of the material and are essential for regulatory studies. While Katageri did not perform the work he should have, the principal investigator (PI) of the project, Polumetla Ananda Kumar of NRCPB, did not monitor him either. “On his part, the PI did not perform the duties of overall coordination, monitoring and filling in the gaps that are normally expected of the PI.” And, the regulators, the Genetic Engineering Appraisal Committee (GEAC) and RCGM do not seem to have noticed these lapses.

While the regulatory oversight is not mentioned in the inquiry conducted by Sudhir Kumar Sopory, vice-chancellor of Jawaharlal Nehru University in Delhi, and his team, it does highlight the shocking weaknesses in the ICAR system. In its rush to develop an indigenous variety of GM cotton, the institutions and scientists that were involved in the project appear to have thrown due processes and ethics out of the window as DTE reports have shown. BNBt was given the green signal for commercialisation in 2008 despite reservations expressed by certain scientists.

It became controversial because the genetic event MON531 is the intellectual property of agrobiotech giant Monsanto and is the most widely used event in the cotton hybrids sold in the Indian market. That is the primary reason; the other is that when the seed was distributed to Mahabeej, the Maharashtra state-owned seed corporation for multiplication in 2009, it failed (see ‘Cleaning the cotton stain’, DTE, February 29, 2012). Subsequently, after ICAR ordered the suspension of production and sale of BNBt in December 2009 because of “contamination”, the event was “purified” but by whom is not known. In its report made public in December, the Sopory committee says “it appears that an event that is different from MON531 is present in ‘purified’ BNBt”, but added that “third party verification is needed to conclusively establish whether the event in purified BNBt is the same as the event in original BNBt or not”. As such, “all the earlier data obtained from biosafety studies and field trials with BNBt appear to have been conducted with material that contained the MON531 event, and thus are invalid.” Accordingly, “The ‘purified BNBt’, as far as its biosafety and evaluation studies are concerned, is a new event that must now go through the regulatory process as a fresh application, if ICAR intends to commercialise it.”

However, it still leaves wide open the question of whether BNLA106 is an independent event. Ananda Kumar, principal scientist of NRCPB who later became its director, was pivotal in developing the desi GM cotton. As lead centre for the NATP Project, NRCPB provided the gene construct for genetic transformation, conducted gene integration studies apart from the technical and financial support to UAS-D for genetic transformation of the material into the indigenous cotton variety. The Delhi-based institution also provided details of the gene construct and molecular analysis to RCGM and GEAC for approval. And it is here the committee found the most unethical aspect of the project.

The cry1Ac gene used in BNBt was developed by Illimar Altosaar of the University of Ottawa in Canada, and an expert on plant biology and GM organisms. The gene was obtained by R P Sharma, former director of NRCPB, by signing a material transfer agreement (MTA) with the University of Ottawa. It turns out in 2006, Ananda Kumar tried to negotiate a freedom to operate agreement with Altosaar but did not succeed. To get over this hump, ICAR decided at a meeting in October 2006 that Sharma had signed the MTA in his “personal capacity”, and, therefore, a freedom to operate agreement was not necessary. Using this specious logic, it was decided to call the gene a “NRCPB construct”.

The Sopory committee had three senior scientists with right expertise to tackle the case: Sopory himself is a molecular biologist; B S Dhillon, vice chancellor of Punjab Agricultural University, is a plant geneticist, and Ramesh Sonti, deputy director of the Centre for Cellular and Molecular Biology (CCMB) in Hyderabad, is a specialist in plant pathogens. In addition it co-opted Imran Siddiq, a plant developmental biologist from CCMB. What the committee did not explain or, perhaps, examine is why are there three different vector maps for BNBt apart from the one submitted to the committee. (The vector is a DNA sequence that consists of an insert or transgene, and a larger sequence that serves as the “backbone” of the vector.)

DTE has documents that show the map submitted to RCGM/GEAC up to 2006 is different from the one published in Current Science in December 2007. Interestingly, in the January 2012 issue, the authors had published a corrigendum stating “the gene cassette had been reversed inadvertently” and should be read differently. There is a third map submitted by the NRCPB director to the ICAR director general on 20 October, 2011, which does not concur with the earlier sequences. A further twist came in the new gene integration vector map given to the Sopory committee. According to a molecular biologist who has examined these maps, there is far too much rearrangement of DNA and addition of another 5,800 kb of bacterial vector backbone, “which is not desirable”. A perusal of the facts, says the scientist who did not wish to be named, indicates the “purified” BNBt seeds cannot possibly be the same as the original BNBt of the Current Science paper. “This ‘purified BNBt’ story smacks of attempts to cover up, side-track and confuse the issue.”

The concern here is whether the regulatory authorities are at all aware of this since the information has been kept hidden for 3.5 years after GEAC approved BNBt. The more worrying aspect, say ICAR sources, is that NRCPB has provided the same disputed construct for the genetic transformation of a number of crops, including pigeonpea, chickpea, tomato, castor and groundnut. ICAR has not responded to DTE questions whether such research has been halted.