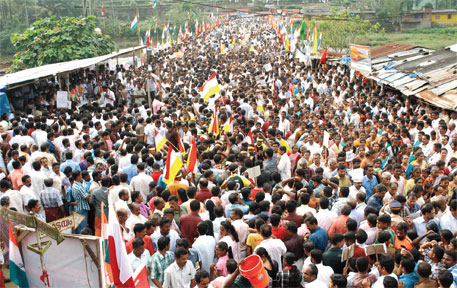 In the past month, the decades-old controversy surrounding the safety of the century-old Mullaperiyar dam in Kerala reached fever pitch. People living downstream fear it can collapse any moment. There have been strikes, fasts, burning of vehicles, deployment of police forces, high-pitched news presentations and even banning of a film, the title of which candidly referred to the row. As protests mount and panic grips people, a confidential survey report, which has been leaked to the media, says the dam has been damaged to the extent that no amount of rectification can salvage it from causing a disaster.

Kerala says it wants to build a new dam, decommissioning the ageing one. But Tamil Nadu, which is the sole beneficiary of the dam, insists that the 116-year-old dam is still robust. To sort out the feud, a Supreme Court-appointed empowered committee is assessing the safety of the dam, located in Idukki district, bordering Tamil Nadu. It is also studying Kerala’s proposal for a new dam. The committee is expected to submit its report to the apex court in February next year.

The dam is on the Periyar River, which originates in the Western Ghats of Kerala and flows across the state to join the Arabian Sea. It was built in 1895 by Madras State, now Tamil Nadu, under the British rule. The British government had struck a lease agreement with the princely state of Travancore, now part of Kerala, to lease around 3,500 hectares (ha) to Madras and grant it all rights over the reservoir water for irrigation for 999 years. Since then, Tamil Nadu has been controlling and managing the dam and diverting the reservoir water for irrigating its drought-prone Madurai, Theni, Sivaganga, Ramanathapuram and Dindigul districts. Every year, on an average, the state diverts 606.83 million cubic metres of water to irrigate around 70,000 ha. It also uses the water to produce 140 MW power.

The two states were cordial until 1979 when the dam developed cracks and started leaking, raising doubts about its safety. The dam was over 80 years old then.

The Central Water Commission visited the dam and recommended lowering the maximum water level in the reservoir to 41.45 metres and carry out strengthening works. Tamil Nadu spent Rs 26 crore on strengthening the dam by constructing a 10-metre-wide concrete backing and on other safety repairs.

A V George, professor of geology and environment at Christ College in Irinjalakkuda, says these repair and construction works have further weakened the structure. Safety concerns heightened instead of dying down.

Panic erupted in November after recurring tremors of the magnitude of up to 3.8 on the Richter Scale hit the dam’s downstream areas; as many as 26 tremors have hit the region in the past eight months. The region also received heavy rain. Water level in the reservoir crossed 136 feet (41.45 m), the permissible level fixed by the Kerala Dam Safety Authority.

The dam, 365.7 metres long and 53.6 metres high, is one of the oldest in the world, well past the 50-year period during which most dams are deemed safe.

Its walls are covered with rubble masonry to protect the core from high water pressure. The core is built with hydraulic lime and surkhi, a mixture of crushed bricks, sand and sugar. This makes it the only dam of its kind in the world, making it difficult to assess the strength of the structure, says the confidential report by M Sashidharan, former chief engineer with the Kerala State Electricity Board. He was Kerala’s observer during a survey of the dam early this year by the Centre for Soil and Materials Research Station, New Delhi. The institute scanned the dam using a remote operated vehicle, which revealed the extent of deterioration the dam has undergone. There are numerous pot holes, crevices and openings on the surface of the dam. The masonry cover has been severely damaged between the depth of 32 m and 29 m throughout the length of the dam.

Several studies have found similar flaws in the ageing dam. Mullaperiyar is a traditional gravity dam, the strength of which depends on its weight. George of Christ College says over the years, about 40 per cent of the lime from the core has leaked out, making it much weaker. Cracks, leaks and seepages have made the structure damp and wet, he adds.

Further, the dam falls in quake-prone area. Between December 2000 and January 2001, the region was hit by tremors of magnitude of up to 5. The Geological Survey of India places Kerala in Zone III, where quakes with magnitude up to 6.5 can happen. A study by the Centre For Earth Sciences at Thiruvananthapuram, in 2001, and a 2009 report submitted to the Kerala government by IIT- Roorkee say the dam cannot withstand quakes of magnitude of six and above. IIT-Roorkee researchers found 22 active faults in the area surrounding the dam. Besides, if one considers the maximum rainfall the region receives, the dam is hydrologically unsafe, says A K Gosain, professor at IIT-Delhi, who has studied the dam for its safety concerns.

What if the dam collapses?

Will 3.5 million people in five central Kerala districts be affected as the Kerala government claims? What could be the course of flash floods?

No one knows correctly, not even Kerala. It has not done a dam break analysis or potential loss mapping, even after establishing a dam safety authority and Mullaperiyar Special Cell in 2006. Only after panic mounted last month, that it asked IIT-Roorkee on November 30 to conduct a dam break analysis and submit the report within six months.

Analysts say a huge disaster can occur if the dam bursts. There are four gram panchayats and a few small towns like Vanditeperiyar between Mullaperiyar dam and Idukki dam, Asia’s biggest arch dam, 36 km down the Periyar. James Wilson, an engineer with the Kerala State Electricity Board and member of Mullaperiyar Special Cell, says if the dam bursts, the flash flood will reach Idukki reservoir within 45 minutes, washing away parts of these villages and towns between these dams and affecting about 70,000 people living there.

The Idukki dam has a storage capacity of 2,000 million cubic metres (MCM) and can hold the flood water from Mullaperiyar dam, but not if its water level is high. On four previous occasions, the water of both the reservoirs have been full to the brim. The situation would be disastrous if the Mullaperiyar dam fails during the monsoon. “Considering the steep topography of the region and the elevated position of the dam, the Rs velocity of the flash flood will be very high,” says Wilson. The high-velocity flash flood would bring down much soil and floating debris, which can clog spillways and exert considerable pressure on the Idukki dam and two adjacent dams, which together form the Idukki reservoir. If they fail to contain the water load, all the nine dams downstream across the Periyar will get breached and the flash flood will run through four central Kerala districts and the port city of Kochi, affecting over three million people, before it merges with the Arabian Sea, he adds.

“The government is extremely worried about the safety of its people,” says Kerala’s water resources minister P J Joseph. “We want a new dam for ensuring the security of our people as well as facilitating continued water supply to Tamil Nadu as it is being given now.” The Kerala legislative assembly passed a resolution in July 2009 for the construction of a new dam at an estimated cost of Rs 600 crore. The state’s stand is “safety for Kerala, and water for Tamil Nadu”.

But Tamil Nadu is not ready to buy this argument. It very well knows if a new dam is built, it will have to sign a new agreement. And in that case, the state will lose the custodianship of the dam and the 3,400 ha on which the project stands. It is apprehensive that the new dam will no longer be operated and managed by their engineers. Further, the state might have to pay Kerala a reasonably good sum for water and the power it produces using Kerala’s water.

Kerala could have opted out of the original agreement of 1886 during the reorganisation of the states in 1956. It did not. Instead, it entered into two supplementary agreements with Tamil Nadu in 1970. The first one helped it acquire fishing rights in the dam and the second allowed it to revise the lease rent from Rs 5 to Rs 30 an acre (0.4 ha) and revise the lease amount once in 30 years. The agreements allowed Tamil Nadu to generate electricity using the diverted waters, which was not there in the original agreement. Tamil Nadu now pays just Rs 8.9 lakh a year as lease amount for the land and the royalty for power.

The renewal of the 1886 agreement for 999 years, whether an act of magnanimity or a blunder, is now a potential worry for Kerala. Over the years, Kerala’s water needs have increased and it is incurring big losses by diverting the Mullaperiyar water to Tamil Nadu. Its Idukki hydel project generates 41.64 million units, worth around Rs 50 crore. By saving the water it diverts to Tamil Nadu every year, Kerala can easily generate power worth Rs 1,000 crore. Kerala, however, has submitted an undertaking to the Centre that it would continue to provide water to Tamil Nadu as is being given now, if a new dam is constructed.

But dams are not for ever

Dam as a permanent structure is a false conception. Bharat Jhunjhunwala, an economist who has researched the dismantling of dams in the US, says decommissioning of a dam has serveral consequences. So the cost of decommissioning and, in cases like Kerala, building new dams and the new site required to dump the debris must be factored in the impact assessment at the time of commissioning a dam. But this does not happen in India, he adds. 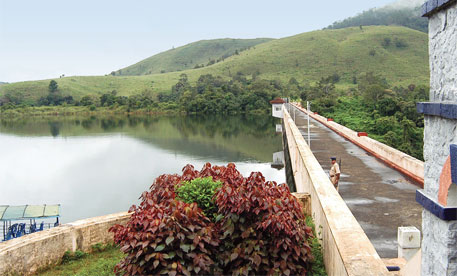 If Kerala’s slogan, “safety for Kerala, water for Tamil Nadu” is sincere, why should it build another dam spending its own funds, that too, in an ecologically sensitive, tremor-prone region? The new dam will submerge 50.5 ha of Periyar wildlife sanctuary.

Kerala should not take the responsibility of storing water for its neighbouring state, putting in danger thousands of lives on its own turf, says A Latha of the River Research Centre at Chalakudy, Kerala.

A possible sustainable option could be immediate reduction in storage level at the dam so as to reduce water pressure on the weak structure. The level can be reduced to 36.5 metres initially as requested by Kerala and then to 33.5 metres. Simultaneously, Kerala can consider the possibility of constructing check dams instead of a new dam and Tamil Nadu can build more tanks to increase its storage facility. This will provide better water security to Tamil Nadu farmers. Those in command area of each tank will be aware of the quantum of water available to them and can plan farming accordingly, she adds.

K J Joy of The Forum for Policy Dialogue on Water Conflicts in India says a study should be done to asses the water needs to the service area and the long term averages of water use. Once it is done, water from the Mullaperiyar reservoir can be diverted to Tamil Nadu during the monsoon and stored in the existing or new storage facilities there, he says.

Whether there should be a new dam or the existing dam is safe to store water for some more time can then be dispassionately assessed by independent experts, Joy suggests.