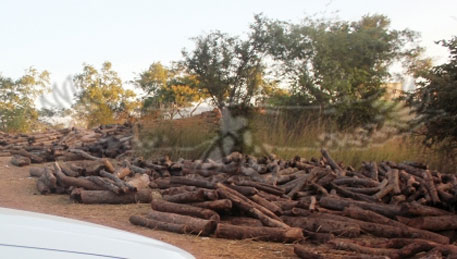 High on demand in the international market for its use in the production of gunstocks and other artefacts, Mukula tree has fallen in the hands of the illegal timber industry. According to Zambia Reports, illegal timber traders of Zambia have joined hands with the Chinese business community and are indiscriminately cutting down Mukula trees. The Chinese businessmen export the timber to East Asia.

Mukula Tree, also known as redwood for its colour, grows in the forests of Central Africa. “The species will become extinct soon if indiscriminate cutting down of the tree is not stopped,” businessman Menyani Taundi who is based at Mwami border in Chipata told Zambia Reports.

Ignoring the government’s ban, the Patriotic Front (PF) cadres in the Eastern province of Zambia are felling and exporting Mukula with impunity, says the news report. “Their insatiable hunger for money from the Chinese is alarming,” says Taundi.

“The interests of the Chinese businessmen lie only in making money. They will finish the timber in Zambia and then go to another country,” he says. “The government must stop this abuse of the natural resource at once”.

Last week, the Forestry department of Eastern Province arrested Chinese national Tom Chi for having 3,864 logs of Mukula in his possession. However, the department gave him as many as five days to produce authentic documents to export the timber to Malawi. Taundi says the department was acting as if there was no ban on export of the timber in Zambia.

Lands and Natural Resources and Environmental Protection Minister Mwansa Kapeya says the government has intensified patrolling. However in the recent past, several trucks loaded with Mukula logs have been seized from different areas in Zambia.

The abuse of natural resources with absolute disregard for the future generations must stop, says Taundi. “Else, Zambia will soon turn into a desert”.