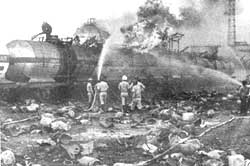 The participants will be the tripartite constituents of the ILO: representatives of governments and of employers and labour organisations.

The convention will reflect earlier ILO documents on occupational safety and safety in the use of chemicals at work. But for the first time, it will emphasise the need for taking the environment and people living near a hazardous site into consideration. The ILO recognises that the growth of the petroleum and chemicals industries has now made that essential. The convention will prescribe safety measures for every stage in the processing of a hazardous chemical, right from its manufacture to subsequent transportation and storage. However, the ILO convention will have to be followed up by national laws.

There are also likely to be provisions to ensure free flow of information between countries on accidents. An accident-reporting regime will be built up and workers will be routinely involved in the preparation of safety reports, emergency plans and accident reports.

There is unlikely to be anything radically new about this document when it is drafted after the conference. But what will set it apart will be its detail and its comprehensiveness. As the pre-conference report puts it, "Because of the complexity of the industrial activities concerned, the control of a major hazard calls for a systematic approach."

The spectre of Bhopal has made the Indian government keen on this convention. After the Bhopal tragedy, ILO officials had visited India and suggested a control system like that of the European Community's Seveso Directive. But India's track record on ILO conventions is relatively poor. According to an ILO official, India has ratified only 35 out of the 170 conventions passed so far. But preliminary reports prepared by the ILO say that it realises that nations may have had to reject earlier conventions because they were slightly at odds with national laws. This time, the ILO is determined to make the document "sufficiently flexible" to make adoption easy. Adds a ministry of labour official, progressive implementation may be allowed. The ILO had circulated questionnaires to elicit preliminary responses from governments, and India is amongst the 52 countries which have opted for a convention.

The convention is also being supported by labour organisations. "Once this convention is ratified, we'll have done away with all the loopholes," says S L Passey, all-India secretary of the Indian National Trade Union Congress (INTUC). "With ILO monitoring teams in the offing, managements will finally be completely accountable."