Immunisation is a double-edged sword -- providing a shield against diseases, at the same time generating waste that can be hazardous to health and the environment if not disposed of properly. Typically, lethal leftovers of the process comprise used needles and syringes 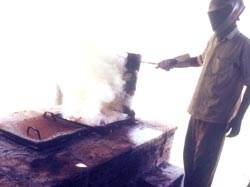 Immunisation is a double-edged sword -- providing a shield against diseases, at the same time generating waste that can be hazardous to health and the environment if not disposed of properly. Typically, lethal leftovers of the process comprise used needles and syringes. Almost 80,000 to 160,000 people are infected every year across the world due to exposure to these. The trend is visibly alarming in developing countries where medical waste management has been lost sight of in the rush to meet immunisation targets. Worse still, international agencies like the World Health Organisation (who) and United Nations Children's Fund (unicef) -- the backbone of most vaccination and inoculation programmes -- are said to be recommending polluting technologies such as small-scale incinerators and safety boxes to deal with immunisation waste.

The extent of residual risk involved in employing these unsound methods was highlighted during the recent 'Inter-country workshop on sound management and safe disposal of sharp (the term refers to needles and syringes) for Southeast Asia region'. The meeting, which was organised by the who in New Delhi from March 11-13, saw participants discuss among other things the "possibility" of the spread of aids due to faulty disposal of syringes.

As many as 30 billion syringes are used worldwide annually. Of these, 1.5 billion are required for immunisation. Developing countries alone account for half of the latter. "In India, 4.2 billion injections are administered per annum, which create needle and syringe waste," reveals Ravi Agarwal, coordinator of Srishti, a New Delhi-based non-governmental organisation (ngo). "Twenty-five million children are born in India every year, and each child has to take eight injections as part of the immunisation plan," points out Ratna Singh, programme officer with Srishti. The country's annual immunisation waste is, therefore, estimated to be 120 million syringes.
Experts apprehend a sharp increase in immunisation waste in the coming years due to the advent of auto-disable (a/d) syringes -- injections that automatically break or jam after being used once. It may be noted that the who, unicef and United Nations Population Fund (unfpa) have come out with a joint declaration , stating that a/d syringes would be an essential part of all their immunisation campaigns by the end of 2003. Prior to adopting the stance, the who conducted a survey in 21 countries wherein a link was established between sterilisation of needles and cross-contamination. The study concluded that the risk is even greater during immunisation. Hence the need for the a/d syringe. "In India it is being used in 15 states in the programme to combat Hepatitis b . By the end of 2005, we should be able to penetrate the entire country," says P Biswal, assistant commissioner, Union ministry of health and family welfare.

While the efficacy of a/d syringes is indisputable, international agencies have not come out with a corresponding plan to deal with immunisation waste, feel experts. Biswal admits that little headway has been made in the country on this front. The situation is equally worrisome in other developing countries. Upassri Sorachart of Thailand's ministry of natural resource management says, "Almost 30 per cent of the total hospital waste in Thailand comprises syringes." Bangladesh is introducing a/d syringes on a large scale for Hepatitis b immunisation, even as "most hospitals currently dump their waste, including reusable syringes, in municipal bins", discloses Tabassum Dana, research officer, environmental health unit, who , Dhaka. Shyam Sundar Misra, chief, extended programme on immunisation, ministry of health, Nepal, proudly proclaims that his country, too, will switch over to a/d syringes by the end of 2003. "We are not against immunisation, but demand safe disposal of immunisation waste," asserts Agarwal.

Experts are of the view that rural areas in particular are ill-equipped to handle the situation. For instance, in India there are 22,000 primary health centres (phcs) and 130,000 sub-centres. Each sub-centre generates about 50-100 syringes a month, which works out to 13 million syringes per month of waste merely from sub-centres. At present, the only option in villages to deal with used needles is open burning, concedes Biswal. "Guidelines need to be prepared for immunisation camps and healthcare workers should be trained in this field," opines Vikrant Chitnis, senior research fellow at the Indore-based Choithram Hospital and Research Centre.


The preferred post-immunisation clean-up choice today is to simply burn the heaps of syringes and needles. This is done either in an incinerator or a safety box. But the main drawback of these methods is that they cause environmental pollution.

Manufacturers acknowledge the fact that small-scale incinerators are not within strict environmental parameters. "We are aware that they aren't ecofriendly. It, however, is the best available technology," asserted an international manufacturer of small incinerators at the recent who workshop. Agarwal retorts, "Developing know-how for safe syringe disposal does not entail application of rocket science. The crux of the problem is that international agencies just haven't explored enough."

small-scale incinerators : This technology is being promoted primarily in developing countries. Already 550 such incinerators have been installed in and around South Africa. Bangladesh plans to set up 460 of them. India is in a slightly better position on this front. "We will not allow small-scale incinerators to dot the whole country. India's Biomedical Waste (Management and Handling) Rules, 1998, ban the burning of chlorinated waste such as polyvinyl chloride (pvc) . And most syringes have pvc ," points out Agarwal. It is another matter that open burning on the sly continues unabated in the entire rural belt of India.

The capacity of a small-scale incinerator varies from four kilogrammes per hour (kg/hour) to 40 kg/hour of waste. Its price ranges between us $600 and us $1,000, and running costs can be twice as much. It is considered an environmentally unsound proposition for a host of reasons. Firstly, burning of waste is being discouraged the world over because of the release of dioxins and furans from chlorinated waste . Then there is the small-scale incinerator's operating temperature of 650-800 degrees centigrade , which is too low for complete combustion of waste . A who working paper lists this as the root cause for emission of toxic pollutants by these devices.

To control emissions, manufacturers would have to shell out as much as 80 per cent of the plant's cost. Not surprisingly, they are demanding lax environmental guidelines.

safety boxes: These are small containers manufactured and promoted by unicef. They can accommodate up to 100 syringes. At present, the boxes are being supplied free of cost. After every shot of injection, the syringe is dropped in the safety box. When full, the whole box is burnt in a small hole in the ground. "Though not pollution-free, this is the simplest and most cost-effective method a health worker can adopt in a rural set-up," claims Pranita Achyukta of unicef 's New Delhi office. She feels that storage of syringes and their transportation to a central facility is not practicable.

alternative techniques: Other processes being employed include encapsulation (needles are placed in a box which is sealed and buried), needle destroyer (a small box which breaks the needle) and deep burial of needles. Richard M Carr, from the who 's head office in Geneva, made a precise observation at the Delhi workshop: "(There is) no one-size-fit-all solution to the problem of immunisation waste." While Carr was advocating a judicious mix of different methods, neither who nor unicef are carrying out any research on non-burn technologies -- considered one of the most suitable options for coping with immunisation waste.


Under non-burn technologies, waste is disinfected at high temperatures. It can then be shredded and recycled. Microwave (electromagnetic waves disinfect waste), autoclave and hydroclave (steam is used as disinfectant in both) are some of the variants of this technique. According to a study carried out by Bangalore-based Command Hospital Air Force, it takes just 85 paise to a rupee to treat one kg of syringe waste if autoclaving is done or the microwave method is followed. The disposal cost goes up to Rs 3.70 in case of incineration.

Autoclaving is preferable for villages since the volume of immunisation waste is not very high in rural areas. A central waste management facility can be identified at the district level which would treat the waste. The Central Pollution Control Board is notifying norms for such units. Meanwhile, the Himalayan Institute Trust Hospital (hith) near Dehradun has taken the lead in this direction. It covers almost 800 villages (within a 150-km radius) under its syringe collection and reprocessing programme. Immunisation waste is brought to hith in safety boxes. There it is autoclaved, shredded and recycled. The hospital is earning Rs 50,000 per month through these operations. The Chennai-based Sundaram Hospital has also adopted a non-burn method. After syringes are disinfected, the plastic component is recycled and needles are supplied to a foundry for reprocessing.

It is widely believed that there are safer options than incineration for treatment of immunisation waste. And if polluting burn technologies are pass in developed nations, why are they being touted as a hot prospect for developing countries?