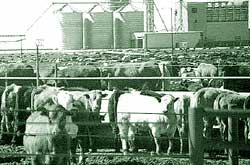 the us Environmental Protection Agency (epa) is facing severe criticism from environmentalists and traditional family farms for its proposal that ostensibly aims to reduce pollution in large-scale farms, also known as factory farms. The agency has proposed that it will not sue factory farms for violations of environmental laws in exchange for the farms funding a study of the toxins they emit. But its detractors say it has played into the hands of the animal farm industry to make money instead of protecting people's health interests.

" epa 's back-room deal is environmental extortion, plain and simple. Instead of citizens paying epa to do its job, this deal has big agribusiness pay epa not to do it," says Terry Spence, a grace Factory Farm (gff) project consultant who operates a second-generation family farm in northeast Missouri. gff is a non-profit organisation established to eliminate factory farming in favor of a sustainable, economically viable and environmentally sound agricultural sector.

Environmentalists believe the agency has the authority to study air emissions and does not need to ask the concerned industry to fund its work. epa gets funding from the taxpayers' money and the money collected from enforcement actions against industries that violate environmental laws. The fact that the epa is hand in glove with the industry emerged as early as October 2003, when non-profit organisation Sierra Club discovered that the agency had agreed to a consent agreement that proposed amnesty to all Animal Feeding Operations ( afo s) of factory farms from Clean Air Act violations, in exchange for a us $500 fine and a us$2,500 fee to finance an air quality monitoring programme. The programme was to be controlled by the afo s themselves.

Sierra Club says in its website that the country's drinking water, rivers and lakes are at risk from these corporate-owned factory farms. They produce staggering amounts of animal waste and are also responsible for releasing 73 per cent of ammonia that is discharged into the country's air.