In search of gravitational waves 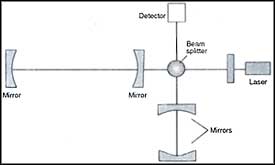 US SCIENTISTS are making the most elaborate efforts yet to detect gravitational waves, which are the distortions in the fabric of space and time predicted by Albert Einstein's theory of relativity.

These waves are produced during violent events in the universe, such as the collision of two neutron stars or the merging of two black holes. However, the effect is so subtle, detecting it requires measurements of phenomenal accuracy and sensitivity. It is for this reason that gravitational waves have not yet been observed despite numerous experiments to find them.

However, this may soon change, with the commissioning of the Laser Interferometer Gravitational-Wave Observatory, a $250-million-dollar project sanctioned by the US National Science Foundation (Science Vol 260, No 5108).

The project is to be conducted at two sites -- Hanford, Washington, and Livingston, Louisiana. Powerful lasers at each site will shine light through two identical vacuum pipes, each 4 kilometres long and 1.21 metres in diameter, placed at right angles to each other.

At the ends of both pipes, small weights fitted with mirrors will reflect the light beams back and forth thousands of times before returning them simultaneously to a detector. A passing gravitational wave will cause one beam to reach the detector slightly out of phase with the other. The resulting interference pattern will yield information about the strength and shape of the gravitational wave.

However, even a strong gravitational wave would only cause a minute separation between the test masses. To detect such a minute signature, the researchers must eliminate all seismic vibrations and noise, which is a task requiring incredible levels of precision.

Meanwhile, astrophysicists George Smoot of the Lawrence Berkeley Laboratory and Paul Steinhardt of the University of Pennsylvania are pursuing an indirect approach to confirm the existence of gravitational waves. Their method is based on observation of cosmic radiation produced during the Big Bang, the primeval event that is thought to have given birth to the universe (Science, Vol 260, No 5107).

The Big Bang is supposed to have released gravitational waves in copious amounts and their signatures should still be present in the cosmic background radiation that fills the sky today. Smoot and Steinhardt hope to search for these signatures in the form of irregularities in the cosmic radiation by analysing data collected by NASA's Cosmic Background Explorer satellite and comparing it with other measurements made by balloon-borne detectors and ground-based instruments at the South Pole.

Each of these detectors measures fluctuations in the cosmic background radiation at different size scales and a comparison of their measurements should make it possible to pinpoint which part of the fluctuations are caused by gravitational waves.