In the wrong ministry?

Biotech Regulatory Authority will have too much power, no checks 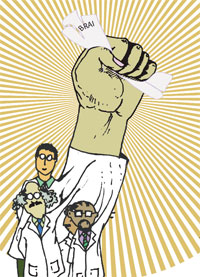 FEW laws have been embraced as wholeheartedly by industry as BRAI or the Biotech Regulatory Authority of India Bill, 2011. Yet to be introduced in Lok Sabha, following a last-minute hitch, the proposed law has received the full support of the Association of Biotech Led Enterprises (ABLE) and other leading organisations that campaign for the promotion of biotechnology primarily for one reason: a single-window mechanism that will streamline the regulatory processes.

“It is a visionary step forward,” finds V Ram Kaundinya, chairperson of ABLE-AG, the agriculture interests section of the lobby group. ”Once BRAI comes into place we are sure we will have a more science-based, predictable and consistent regulatory policy environment, so critical to take the agri-industry to the next level.” BRAI will replace the current regulator, the Genetic Engineering Appraisal Committee (GEAC), which operates under the Environment Protection Act’s rules of 1980.

Industry says it does not have any quibbles with the Bill because, as Kaundinya points out, it “takes good care to ensure the authority is filled with people of reputed scientific and academic calibre”. The Bill was to have been introduced in the monsoon session of Parliament by Science and Technology minister Vilasrao Deshmukh. But it was delayed apparently on the account of objections from some Congress MPs. It is learned that ruling party MPs had pointed out that the Bill was not “implementable” in its current form because of the inherent conflict between different regulators in the pharmaceuticals sector. But this apart, there has been widespread criticism of where the law is being housed—in the Science and Technology ministry.

This is clear conflict of interest, say farmers’ representatives, public health organisation and anti-GM activists. As one MP emphasises, “This is, perhaps, the reason for the skewed form of the Bill which propagates biotechnology, although in a regulated manner, instead of focusing on biosafety.” Most critics of the proposed law believe it should be reworked jointly by the ministries of environment and forests, health and agriculture, specially since developed countries have brought biotechnology regulations under the rules of health and environment ministries.

To verify if such criticism was valid Down To Earth did a quick survey of biotech regulatory laws elsewhere and found that in most countries regulators did indeed come under the laws of these two ministries. Here is how it works in three developed countries:

CANADA: The world’s third largest producer of genetically modified organisms (GMOs) has different pieces of legislation governing biotechnology and GMOs but all decisions are primarily with the environment ministry, guided by the Canadian Environmental Protection Act. It also consults with Health Canada (ministry). As for regulation of foods derived from biotechnology, all decisions are the mandate of Health Canada.

THE UK: Here, the regulations are monitored by the Department for Environment, Food and Rural Affairs (DEFRA). The Environmental Protection Act (EPA) is the primary legislation that gives the DEFRA secretary of state powers to control the release of GMOs. The Genetically Modified (Deliberate Release) Regulations 2002 supplements the EPA.

AUSTRALIA: The Gene Technology Act of 2000 is a national scheme for the regulation of GMOs which includes legislation in every state and territory and by the federal government. The Office of the Gene Technology Regulator is part of the Commonwealth Department of Health and Ageing. It comprises some 50 scientific and legal staff who monitor compliance with policy. Its primary concern is to protect the health of people and the environment.

Arjula Reddy, co-chairperson, GEAC, puts his finger on the critical difference between the current and proposed regulator when he says “BRAI is based on single-window clearance system, while GEAC has a wider participation of scientists and experts from all relevant fields and a nominee appointed by the Supreme Court to ensure that all issues are addressed properly.” However, “the flip side is there will be full time regulators with specific budget and well established mechanisms for evaluation, monitoring and post-release surveillanc,” Reddy concedes. But with a final draft yet to be formulated, ruling party sources say that the government may be forced to take into account valid criticism based on experience elsewhere.
News News News United Kingdom (UK) United Kingdom (UK) Ministry of Science … Ministry Of Health … Ministry Of … Ministry of … Ministry Of Agriculture Legislation India Government Of India (GOI) GM Crops Canada Biotechnology Industry Biosafety Agriculture
SUPPORT US