At a time when most countries are phasing out mercury, India has donned the dubious mantle of the world's toxic capital. Its import of elemental mercury doubled from 254 tonnes in 1996 to 531 tonnes in 2002, making it the biggest consumer of the hazardous element across the globe 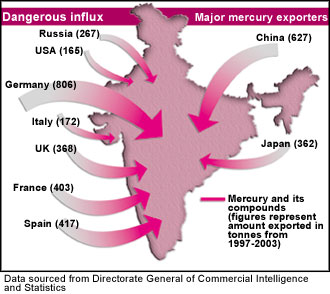 at a time when most countries are phasing out mercury, India has donned the dubious mantle of the world's toxic capital. Its import of elemental mercury doubled from 254 tonnes in 1996 to 531 tonnes in 2002, making it the biggest consumer of the hazardous element across the globe.

The shocking fact was brought to light by the New Delhi-based Centre for Science and Environment (cse) at its recently held 'Conference on Mercury Pollution in India'. "Mercury contamination is spiralling in India, with high levels of the substance being detected in groundwater and fish. Whereas the import of elemental mercury has doubled over the past seven years, that of organomercury compounds has increased 1,500 times," disclosed Chandra Bhushan, the associate director of cse's industry and environment unit. Worse still, most of this mercury remains unregulated, posing a threat to human health as well as the environment, he added while speaking during the meet.

The highly toxic element serves as a raw material for various industrial sectors in India. One of its most common applications is in mercury-cell based chlor alkali plants. Apart from this, it is used in pesticides, batteries, electrical and electronic gadgets, thermometers, dental amalgam fillings, paints, etc. Another major source is coal utilised in thermal power plants. Indian coal contains 0.01-1.1 parts per million of mercury and burning it leads to the release of the element. According to cse estimates, close to 75 tonnes of mercury is discharged annually due to this process.

When all this mercury is released into the environment, it causes serious health problems. In this regard, J S Chopra, professor emeritus, department of neurology, Post Graduate Institute of Medical Education and Research, Chandigarh, made a significant observation at the conference. He pointed out that even according to the World Health Organization, there is no safe level of mercury for humans. Mercury is a known neurotoxicant. Exposure to it can cause a rash of complications: from irritability, and speech and visual impairment, to hypospermia, kidney failure and Alzheimer's disease.

Despite these known risks, India has displaced the us as the 'world leader' in mercury consumption. The total mercury use in the us stood at 346 tonnes in 1997-1998, while India's was 245 tonnes. But us Geological Survey reports indicate that usa is weaning itself off the toxic element. India, on the contrary, is headed in the opposite direction, its consumption level skyrocketing to 1,386 tonnes in 2002-2003.

The Union ministry of commerce and industry's latest figures pertaining to the import of mercury and its compounds make this trend abundantly clear (see table). The data has been collated by the Kolkata-based Directorate General of Commercial Intelligence and Statistics. There has been a growth in the inflow of mercury-based products, too. For instance, the number of mercury vapour lamps recorded an alarming rise -- from 2,100 in 1996 to 0.12 million in 2002. Thermostats and button cell imports have surged as well.

The United Nations Environment Programme's 'Global Mercury Assessment Report 2002' delves into the reason behind this pattern. It notes that the reduction in mercury use in developed nations has spawned an increase in the consumption of the metal and application of outdated technologies related to it in developing countries. That the former provide mercury to the latter at low prices makes the proposition all the more alluring. The flipside is that India is not only a victim but a perpetrator as well: it, too, is guilty of exporting mercury and mercury compounds.

The most worrying aspect of India's opting for mercury on such a large scale is that the Union government is not keeping tabs on where all of it is being used. The amount utilised in chlor alkali and other products is 70 tonnes and 62 tonnes, respectively. The net import of mercury is, however, pegged at 531 tonnes. As much as 399 tonnes are, therefore, not accounted for. Furthermore, the authorities regulate only 0.2 tonnes of mercury in chlor-alkali plants' wastewater and in hydrogen. What happens to the rest is anyone's guess. India also imports 1,312 tonnes of organomercury compounds. But the government has no clue about the application.

The future appears even bleaker for India. By 2010, the eu will have about 13,000 tonnes of leftover mercury from its closed chlor alkali plants. To take care of the problem, it has already signed an agreement with Minas de Almaden, Spain's biggest miner. The latter will buy this 'waste' from the eu and put it in developing country markets in place of mined mercury. The us, too, has about 4,435 tonnes of mercury reserves that it needs to dump somewhere. With India consuming almost 50 per cent of the total global amount, the us is bound to see it as an ideal dumping destination.

The unchecked inflow of mercury into the country (see map: Dangerous influx) could propel it towards a disaster of the magnitude of the one witnessed by Minamata in the mid-1950s. Methyl mercury had then led to mass poisoning in the Japanese town. The trouble was traced to a company which was throwing mercury waste into a nearby stream.

The issue of mercury in water was broached at the cse meet. V Rajagopalan, chairperson of the Central Pollution Control Board, revealed that the concentration of the substance in water was being monitored, but admitted that more work was required on the subject.

Significantly, there is no national mercury monitoring programme in India. Although the Hazardous Wastes (Management and Handling) Rules, 1989, prohibit the import and export of mercury-bearing waste and stipulate environmentally sound management, mercury continues to make its way into the country in various forms. The authorities must wake up to this toxic challenge before it is too late.