India bans use of dolphins for commercial entertainment 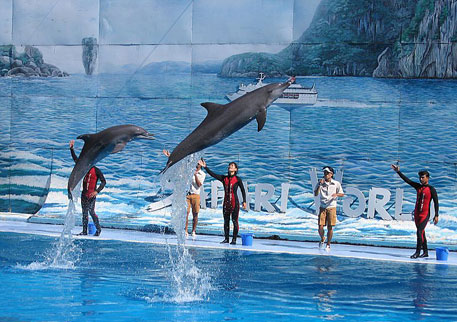 The Union Ministry of Environment and Forests (MoEF) has decided not to allow the establishment of dolphinariums in the country. In an order issued on May 17, it has asked all states to reject proposals for dolphinariums either by private parties or by government agencies, asking them not to allow import or capture of cetacean species and their use for commercial entertainment, and private or public exhibition.

“The cetaceans in general are highly intelligent and sensitive, and various scientists who have researched dolphin behaviour have suggested that they have unusually high intelligence compared to other animals. This means that dolphins should be seen as “non-human persons” and as such should have their own specific rights,” says the MoEF order. It is thus morally unacceptable to keep them captive for entertainment purpose, it adds.

Cetaceans, including whales, dolphins and porpoises, are known to be highly intelligent animals. However, they do not adjust well to living in captivity. Confinement alters their behaviour and causes extreme distress. Several countries, including Brazil, the United Kingdom and Chile, have banned dolphins in captivity. In India, the Gangetic Dolphin and Snubfin Dolphin are protected species as per the Indian Wildlife (Protection) Act, 1972. The government has also declared Gangetic Dolphin as the national aquatic animal.

Nipped in the bud

Several state governments had recently announced plans for the state tourism development corporations to establish dolphinariums for commercial dolphin shows. Dolphins are a major tourist attraction at amusement parks abroad. The major proposals that were made for similar establishments were by the Maharashtra Tourism Development Corporation, the Kerala fisheries department in Kochi and a few private hoteliers in Noida in the National Capital Region.

India's only experience of keeping dolphins was in the late 1990s. Four dolphins were imported from Bulgaria to Chennai's Dolphin City, a substandard marine-themed amusement show, where they died within 6 months of arrival. Various animal protection organisation under the banner of Federation of Indian Animal Protection Organisations (FIAPO), have been campaigning in the country to ban the establishment of dolphinariums.

“It is a landmark document which will go a long way in the conservation of dolphins. The language it has used in the favour of rights of the cetaceans is phenomenal. I hope the states will implement the order in letter and spirit,” says Puja Mitra, campaign manager of FIAPO. We are so glad that India has taken the lead in protection of dolphins. Now several organisations in other countries are also pressurising their governments to follow the foot-steps of India and ban dolphinariums, she adds.