Just 1 per cent of children in the country receive adequate food, healthcare and environmental health that are required for normal growth 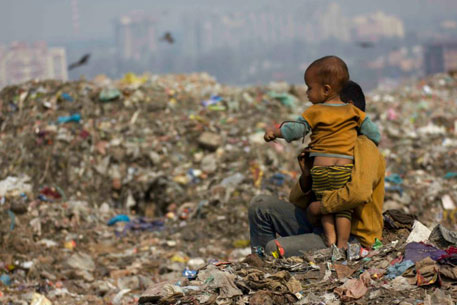 India can drastically reduce the number of children with stunted growth, suggests a new report by World Bank. It says adequate feeding, healthcare and environmental health can reduce the number of stunted children (6 to 24 months of age) by half (see box). The report, Nutrition in India, is based on data from the National Family Health Survey 2005-06 and the HUNGaMA Survey 2011.

In the 100 worst performing rural districts surveyed The HUNGaMA 2011, stunting among those who have adequate feeding, care and sanitation is 20 per cent as compared to 52 per cent among those who were adequate in none. The problem, says the report, lies in the fact that just 1 per cent of the rural children have all adequacies. “There is only a narrow window of opportunity – from conception to two years of age – to improve stunting. Height at age two is the best predictor of adult height and of future human capital, it says.

National data shows that stunting in children from households in middle and upper wealth quintiles is also quite high – about 50 and 25 per cent respectively. The situation is not much better among the wealthiest Indians—only 7 per cent children between 6 and 24 months receive adequate feeding, health care and environmental health.

“Appropriate infant and young child feeding practices even in the highest wealth quintile are extremely poor. This indicates that undernutrition in India is not a poverty or food insecurity issue alone, and that child care and feeding information and awareness play an important role. Effective interventions, which cover the three critical determinants, when provided at scale during the first 1,000 days of life, can reduce stunting and improve undernutrition significantly,” said Onno Ruhl, World Bank country director in India.

Annually, India loses over $12 billion in GDP to vitamin and mineral deficiencies, the report says. It also reiterates the significant direct and indirect economic losses associated with undernutrition with direct productivity losses estimated at more than 10 per cent of lifetime individual earnings, and about a 2-3 per cent loss to GDP. Indirect losses are associated with deficits in cognitive development and schooling, and increased costs of health care.