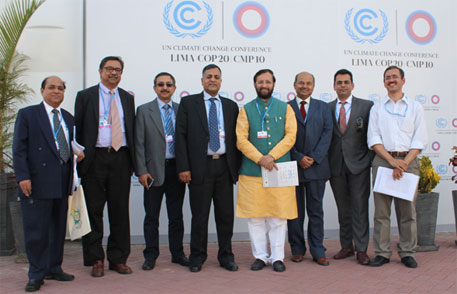 India’s environment minister Prakash Javadekar said in Lima that the new climate agreement in the works must be based on equity and differentiated responsibility. He was speaking at the High Ministerial Meeting on Durban Platform for Enhanced Action, held on December 10, where ministers from various countries made their presentations. The meeting was presided over by Conference of Parties (CoP) president, Manuel Pulgar-Vidal.

From the statement made by countries, it was evident that there was a general understanding that the intended nationally determined contributions or INDCs (countries’ contributions towards addressing climate change) would be decided by individual countries and that as key drivers of climate action these would be a crucial component of the new climate agreement scheduled to be signed in Paris next year. Countries also called for a consensus for identifying the upfront or baseline information of INDCs in the Lima summit. There was also a broad consensus that the new agreement should be “fair and ambitious” and should result from a Party-driven and inclusive process.

However, developed and developing countries were inflexible on various fronts.

Statements from developing countries mainly focussed on original principles of the UN Framework Convention on Climate Change (UNFCCC). Equity and common but differentiated responsibilities (CBDR), all elements in the mandate of the Durban Platform for Enhanced Action (ADP), including “adaptation, finance, technology transfer, capacity building”, should be a part of the 2015 agreement, they said. Simultaneously, these should also be a part of INDCs and developed countries should extend full support in preparation and implementation of INDCs, they added. Developed countries statements pertained mainly to revised principles of differentiation, but confined mainly to vulnerable countries and international review of INDCs.

India, for instance, insisted the new climate agreement must be completely in accordance with the principles of the original UNFCCC. “We are not here to re-write the Convention,” said Javadekar. He insisted there was no scope of discussion of the new language terms used by the developed countries like “evolving responsibility”, which is intended to dilute the clear demarcated divide between the rich and poor countries. Regarding INDC, which the countries have to submit by the middle of next year, Javadekar said: “INDCs are not distinct from 2015 agreement and they must be all-encompassing [should contain all elements like adaptation, finance, technology transfer, capacity building].” He urged for “no slackening” of mitigation actions by developed countries pre and post-2020 and also called for party-driven and inclusive climate negotiations process.

Developing countries’ views broadly echoed India’s stand. China insisted that the Lima outcome is significant and reiterated that it would cut “45 percent carbon emissions by 2020 against 2005 levels”. It called for identification of  baseline information for INDCs, especially the scope of INDCs, and insisted that it should be “comprehensive.”

Developed countries like the US, Japan, EU, Norway, Australia assured their full commitment to UNFCCC, but also advocated the changing realities to be taken into consideration. So while the EU wanted the principles of equity and common but differentiated responsibility and respective capability (CBDRRC) “to be applied dynamically”, US chief negotiator Todd Stern wanted principles so that “everybody could move forward”. Countries like Norway, Sweden and Japan openly endorsed that INDCs should be focused on mitigation only.

In an interesting development, Australia, the UK and the EU hailed the recent US-China deal and went to the extent of calling it “a good example of differentiation”. In the entire climate summit, there has not been a critique of the deal; it has been largely welcomed by many countries. All developed countries recognised and assured support to most vulnerable countries to deal with the impacts of climate change.

Countries like India have always been against any kind of review and assessment of their climate actions. This was again reiterated by Javadekar in the high-ministerial meeting. On the other hand, Parties including Norway, the EU, the UK, Japan, US, Canada and Poland advocated international review of commitments which would lead to a fair agreement.

Few countries like Denmark and Indonesia pointed towards a need for a greater political momentum. Denmark, in particular, expressed disappointment that the events like pledges to the Green Climate Fund (GCF), US-China deal has not translated into the expected spirit and momentum in Lima summit.

The high-level ministerial meeting also saw statements by civil society. So while All India Women’s Association called for new climate agreement based on gender equality, World Farmers Association urged agriculture be made a part of the new agreement.