ISRO blasts off the 1,425-kg rocket amidst loud cheers; satellite to be placed in geosynchronous orbit 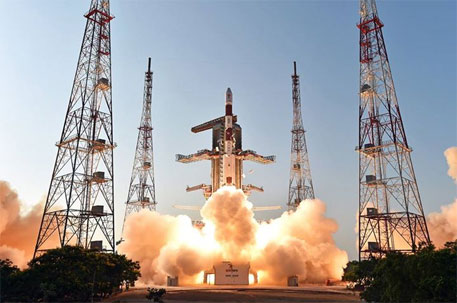 Indian Space Research Organisation (ISRO) scientists blasted off the 1,425-kg rocket at 5.19 pm amidst loud cheers. The satellite will be placed in the geosynchronous orbit, about 36,000 km above the earth.

The satellite cost around Rs 150 crore and the PSLV-XL version rocket used to launch it cost approximately Rs 130 crore.

Considered to be another feat after last year’s Mars Orbiter Mission (MoM), the latest satellite will help improve the country's navigation service in the South Asian region which is currently under development.

IRNSS-1D joined three others sent earlier for the same purpose. According to an ISRO official, the latest launch is one among the seven in the IRNSS constellation of satellites.

India's aim is to start its own satellite navigation system gradually. According to scientists from the Time and Frequency Division of the Council of Scientific and Industrial Research (CSIR), IRNSS-1D is equipped with three atomic clocks.

Senior Scientist Ashish Agarwal of the National Physical Laboratory (NPL) of Council of Scientific & Industrial Research (CSIR) told Down To Earth that IRNSS 1-D's higly-accurate atomic clocks have been designed by NPL.

These clocks will keep a track of time which will guide IRNSS users. “IRNSS is somewhat like the Global Positioning System, (GPS) which is regulated and controlled by America. During various calamities, we have to depend on the American Global Positioning System (GPS). Now, we are moving towards developing our own navigational system,” Agarwal said.

He added that instead of Caesium, a radioactive element used in atomic clocks to precisely calculate time, these satellites are equipped with Rubidium.

“By using Rubidium, our clocks can be transported by satellites as Rubidium atomic clocks are portable,” he Agarwal said.

A senior ISRO official said India is likely to scale up the number of satellites to 9.

According to an ISRO official, IRNSS is an independent regional navigation satellite system being developed by India. It has been designed to provide accurate position information service to users in India as well as the region, extending up to 1,500 km from its boundary, which is its primary service area.
“IRNSS will provide two types of services — Standard Positioning Service (SPS) which is provided to all the users and Restricted Service (RS) which is an encrypted service provided only to the authorised ones,” director, publications and public relations, ISRO, Deviprasad Karnik said. It is mainly used for terrestrial, aerial and marine navigation and disaster management, Karnik added.

“There is a plan to launch the remaining satellites, IRNSS 1E and 1F, during the third and fourth quarter of this year. The last one, IRNSS 1G, is scheduled for launch at the end of this year or beginning of next year,” Karnik told Down To Earth.
IRNSS’s development started way back in 2011 around the same time as the European Union’s navigational system Galileo. At present, there are three systems which are in place or going through various upgradation. These include GLONASS, the Russian Navigation System and BeiDou or Compass Navigational System developed by China in 2000.