At the last count their number was 1,411; experts doubt latest census

INDIA’S tiger habitats may be shrinking but its tiger population has increased, claims the Union Ministry of Environment and Forests (MoEF). On March 28, the ministry announced 295 tigers have been added to the previous estimate—the 2006 count had estimated 1,411 tigers in the wild, spurring corporate-sponsored save-the-tiger campaigns revolving around the number.

The latest census, conducted between December 2009 and December 2010, says the tiger population now is 1,706; the figure is not an actual head count but an estimate. Some conservationists are sceptical about the dramatic increase. MoEF officials claim the tigers have increased because of conservation efforts, new areas being surveyed and improved counting system.

Field information about tiger signs, prey availability, habitat conditions and threat from human disturbances were collected by forest patrol units (see ‘Cat count’, Down To Earth, April 15, 1998). In addition to this, the camera-trap method was used in select sample areas covering 10,500 sq km or 14.4 per cent of the total area of 72,800 sq km.

These cameras photographed 615 individual tigers (identified by their stripe patterns); the information gathered was extrapolated to other areas—tiger population in a particular area where camera trap is installed is used as the base to determine the tiger population in another near-identical area. The camera-trap method to capture images of the elusive predator was introduced for the first time in the 2006 survey but it was used in a much smaller area. The final estimates are based on findings in the three-phase census.

MoEF officials say the method used in the latest tiger census was scientific and leaves little room for error. “The final estimates provide a comprehensive and statistically robust, peer reviewed result for the country,” says Rajesh Gopal, director of Project Tiger in MoEF. The finding was announced at the international tiger conservation meet in Delhi. MoEF says the 2010 National Tiger Assessment used several innovations, including partnership with non-profits such as Wildlife Trust of India, Aaranyak and World Wildlife Fund for Nature-India. During the survey, the Centre for Cellular and Molecular Biology helped with DNA analysis of faecal samples to estimate tiger numbers in each area.

The 2010 tiger assessment is notable for its first attempt to estimate tiger populations in the Sunderbans in West Bengal using satellite telemetry in addition to sign surveys. The Sahyadri tiger reserve in Maharashtra was surveyed for the first time. The tiger census shows new areas populated by tigers, such as the Palpur-Kuno sanctuary and Shivpuri national park, both in Madhya Pradesh.

Habitat cover down 17 per cent

But the numerical increase in tiger number contradicts some of MoEF’s data. Part of the increase is on account of addition of new sample areas like the Sunderbans. The 2010 estimate says the Sunderbans has 70 tigers, though MoEF had earlier maintained the tiger population there is 200. The new estimates are based on satellite images and camera traps while the previous one was based on trail and pug mark monitoring.

The Sunderbans is a difficult terrain to monitor, so the estimates in this region are subject to detection error.  There is also a disconnect between the rising tiger numbers and declining forest cover. While announcing the increase in tiger population, environment minister Jairam Ramesh said tiger habitat has shrunk from nine million hectares (ha) to 7.5 million ha in four years. “Tiger corridors are under severe threat, especially in central India— Madhya Pradesh and northern Andhra Pradesh,” he said. These two states fared the worst in the census survey (see map below).

How reliable are camera traps

Conservationists were sceptical about tiger population increasing when their habitats are on the decline. They also expressed reservations about the camera-trap method. “Forty per cent of the cameras used across the country malfunctioned. They were replaced, leading to a loss of three to four months during the monitoring period. So, one cannot be sure of the results,” says Nitin Desai of Wildlife Protection Society of India that works to prevent poaching and trading of wildlife animals and their parts. He was also critical of the extrapolation method used by forest officials to arrive at the number 1,706. Forest staff in Maharashtra is ill-equipped to undertake such an exercise and this may be the case in other states too, says Desai. He adds this could be a reason census data may not be accurate. Sources in the Wildlife Trust of India, which participated in the survey, say almost 50 per cent of the cameras malfunctioned.

Ullas Karanth, who heads the Centre for Wildlife Studies in Bengaluru, says the process used to generate estimates for tiger populations in individual landscapes is not in a scientifically acceptable form. He has written papers on tiger conservation and counting and has also been monitoring about 3,000 sq km of tiger habitats in Karnataka. Karanth says the extrapolation method used in the 2010 assessment is “linear and fundamentally against recording natural or ecological occurrences”. The estimate based on density of signs like tiger faeces and trails and the actual count of the animals present can vary greatly. Karanth says the sample area selected for tiger estimation was too small; in Karnataka it was less than 300 sq km.

The biggest problem in assessing tiger numbers is that the species has high birth and mortality rates—in a year tiger population can increase or decrease by as much as 20 per cent. “Conducting a survey every four years is too long a gap for us to determine the changes or causes of changes in tiger populations,” says Karanth. He suggests intensive annual monitoring, using camera-traps and DNA sampling of the crucial source population (DNA tests are used to determine lineage in an area) as a more effective method than the unwieldy all-India census exercise conducted every four years. The 2010 assessment cost over Rs 9 crore.

Scientists associated with the census say the latest estimates are closer to ground reality. “So far, we have not had any methodology. The 2006 figures were arrived at through some use of camera-trap method, but mostly through data collected by field officers and thus are doubtful,” says Ashok Kumar, vice-chairperson of Wildlife Trust of India. He says the 2010 assessment has paved the way for improved tiger monitoring as the range covered under it is wider and more varied. He adds that improvement in tiger conservation is evident from better prey base and habitat improvement in places like Karnataka, which has the largest number of tigers in the wild—300. “This has been brought about by better management structure,” says Kumar who emphasised the need to strengthen conservation and not just count the tigers.

Experts from over a dozen nations who participated in the international conference on tiger conservation, too, stressed the need to address the problems of habitat loss and poaching which continue to be the biggest threat to the striped cat. 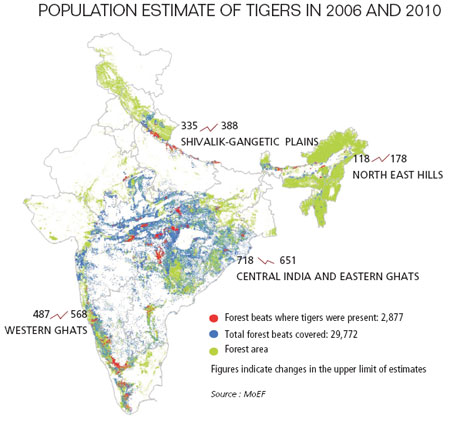 The seven-second meet
In the name of the tiger
You can count the tiger:
Tiger tracking