Despite warnings from environmentalists, Bangladesh allowed commercial shipping through the sensitive ecological zone of Sela river in 2011 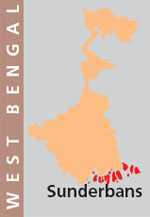 The oil spill in Sunderbans area of Bangladesh has created panic in India and the officials are now gearing up for possible challenges to the environment in near future. The spill occurred on December 9 when an oil tanker carrying more than 350,000 litres of bunker oil sank on Sela river in the region, a major sanctuary for aquatic animals, after being hit by a cargo vessel.

Pradip Vyas, director of Sunderbans Biosphere Reserve in India, informed media that wildlife officials have been deployed in the area to check whether the spill is spreading to India or not. He, however, also stated that there is no confirmation about the oil reaching the Indian territory yet.

Meanwhile Locals have reported that they have seen some impact of oil in the Indian side of the river. Secretary of Sundarbans Matsyajibi Joutha Sangram Committee, a nodal body of fishermen of region, has said that some fishermen have seen large number of fish floating dead in the river on Saturday morning. The officials are now trying to find out if the deaths were caused by oil spill or not. Furthermore, reports of less movement of sea animals like dolphins and crocodiles across Sela and neighbouring Pushur river in Bangladesh have also emerged. The same is feared on the Indian side as well.

The oil spill is so dangerous that the environmentalists have warned that the chemical could harm the delicate ecology of the Sunderbans. The spill also threatens a sanctuary where the rare Irrawaddy dolphins are found. Dhaka Tribune has already reported that its photojournalist has recently located the first dead body of an Irrawaddy dolphin in the Harintana-Tambulbunia channel of the Sela River.

Concerned authorities in Bangladesh are looking into various options to minimise the impact of the spill. According to various reports, the tanker that sank in the river was on its way to deliver oil to a power plant in Bangladesh’s Gopalganj when it was struck by vessel Silver Star. It is believed that the cargo ship was not able to see the vessel due to heavy fog, thus leading to the accident in Chandpal range of Sunderbans area after which the oil spread along a 40-kilometre section of the Sela river.

Bangladesh Inland Water Transport Authority, reportedly, had allowed commercial shipping through Sela river in 2011, despite opposition from environmentalists. Vessels plied on this route between Kolkata, capital of India's West Bengal state, and Mongla Port in Bangladesh.