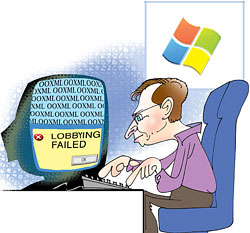 the struggle for global open standards has got tougher with India saying no to Microsoft's Office Open xml (ooxml) document format. The decision comes despite attempts by Microsoft to make the format globally accepted.

On March 20, the Bureau of Indian Standards (bis), India's representative body at the International Organization for Standardization (iso) refused to accept the document format as a standard format for digital documents. India had rejected ooxml last September in Geneva too, where Microsoft submitted the document format for an initial voting at iso. The software giant was given time to clear technical issues so that it satisfied representatives from the government, academia and companies.

bis said the format was neither compatible nor interoperable with other common formats such as the Open Document Format (odf), the existing iso standard for document interchange, developed by the Free and Open Source Community. Besides, Microsoft holds patent rights over ooxml, which disqualifies it as a standard format under bis regulations. "India had raised these issues in earlier meetings as well, but Microsoft has not yet responded to them and we saw no point in changing our stand," says Ashish Gautam, a member of the committee on Data Management Systems with bis which took the decision to reject it.

Microsoft awaits a final decision from iso on March 31, 2008, when the organization reconsiders votes from all countries on standardization. Standard regulating bodies from different countries have to present their decisions to iso by March 29. If iso goes against Microsoft, it will incur a huge business loss for the company since governments and large corporations worldwide prefer officially approved standards. Moreover, it has to submit the format for iso certification again through a normal submission route and this will take a long time to get cleared.

As part of its intense lobbying to get the format accepted in India, Microsoft even sought endorsements from 13 ngos in the country, many of which receive funds from it. "We do not know what is ooxml or an odf," says Amod Kant, general secretary of Prayas, an ngo that open source activists allege to have endorsed ooxml. Prayas also receives funds from Microsoft.

Microsoft has admitted it had sent endorsement forms to the ngos. "It is also trying to garner support from academics. It has sent me a letter saying Patrick Durusau, a globally known standards expert, has recommended the approval of ooxml as an iso standard," says P Vigneswara of iit Delhi.

Among bis board members, software companies such as Tata Consultancy Services, Wipro and Infosys, and industry bodies such as the National Association of Software and Services Companies supported Microsoft. But members including government bodies such as the National Informatics Centre, Department of Information Technology and the Reserve Bank of India, technological institutes of higher learning such as iits and companies that provide services of free and open source software voted against it.

ooxml was first adopted as an international standard by European standards body Ecma in December 2006. Ecma submitted it to iso for a "fast track" standardization process. But supporters of odf opposed it, saying there must be only one standard format.