Hunt on for the site of the world’s first thorium-based plant. But is it safe?

The Advanced Heavy Water Reactor (AHWR), to be built by Bhabha Atomic Research Centre (BARC), will be the world’s first. While the design of the experimental reactor is confirmed, BARC is finalising its site. “Construction will begin as soon as site inspection is over and statutory approvals are granted,” says Ratan Kumar Sinha, BARC director. The project will be completed in six years, he adds. The reactor will have 300 MW capacity. It is expected to consume about 12 tonnes of thorium annually. India has one of the largest thorium reserves; about 0.63 million tonnes, according to the Department of Atomic Energy (DEA). “So it makes sense to have such reactors,” says Sinha.

Thorium is extracted from monazite ore, found in beach and river sand (see map). It has significant advantages over uranium. 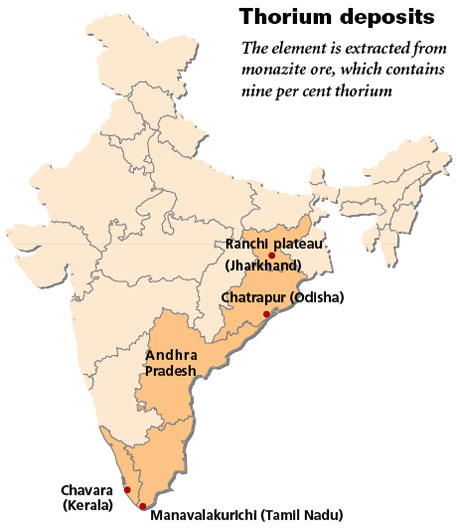 Thorium is also chemically more stable. The radioactivity of the waste generated from thorium is lower than that produced by uranium. Thorium is also three to four times more abundant than uranium, adds Sinha. “Uranium resources are meagre and most of it is imported.”

It is widely reported that thorium plants are safer as their end product is not plutonium, as in the case of conventional plants. Plutonium is widely used in nuclear weapons. This minimises the chances of weapon proliferation. But Arjun Makhijani, president of Institute of Energy and Environmental Research (IEER) in USA, is not convinced. “The naturally occurring uranium ore contains 0.7 per cent uranium-235, which needs to be enriched to irradiate thorium. This enriched form can be used to make nuclear weapons,” he says. Besides, byproducts of the use of uranium-233 include highly radioactive isotope, uranium-232. “These challenges are being addressed by DEA,” says Sinha.

There are other concerns too. No technology has been tested so far to prove the commercial feasibility of thorium-fuelled reactors.

China, Japan, USA and the UK have announced plans to build thorium-based power plants but are yet to move ahead. But BARC claims to have generated enough data during the past five decades to prove that thorium can be used in a commercial and sustainable way. Since safety is the most pressing issue in nuclear plants, BARC says it has taken the best safety measures. These include use of natural circulation of coolant that transports heat to deal with shutdown conditions and station blackouts.

Asked if thorium extraction could cause any environmental degradation, Sinha says, “Mining of beach sand for monazite does not spoil the beach as after ore is removed, the balance sand is returned.”

The thorium reactor will take India close to the third phase of its Nuclear Power Programme, which started 40 years ago. The ongoing first stage uses uranium in Pressurised Heavy Water Reactors. The second stage will be demonstrated by the plutonium-fuelled Prototype Fast Breeder Reactor in Kalpakkam in Tamil Nadu. It is expected to start in 2012.

M R Srinivasan, former chairperson of Nuclear Power Corporation of India Ltd, says generation was forecast to touch 20,000 MW by 2020, but the expected installation is 15,000 MW.