India sets up an organizational structure for climate negotiations

the prime minister recently approved an organizational structure of government agencies to manage the climate agenda of the country at the national and international level. A three-tier structure comprising a core team, a technical group and a guidance group has been formed (see flowchart). Of immediate importance to the teams are negotiations to finalize an agreement for post 2012the year the first phase of the Kyoto Protocol expires. 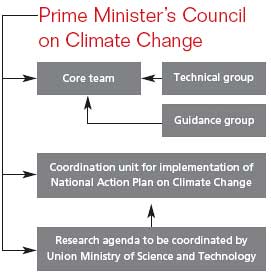 Besides these agencies, the structure will comprise units to coordinate the preparation and implementation of the National Action Plan on Climate Change.The plan, supposed to spell out Indias response to climate change within the country, was to be released before the Climate Conference of Parties meet in Bali in December 2007. But an initial draft was criticized because it had the steps the country had taken in the past but did not come with a future plan.

Overseeing both will be the responsibility of the Prime Ministers Council on Climate Change.