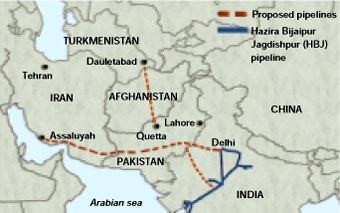 It wasn't just India and Pakistan's cricketing equations in the World Cup that remained unchanged during February-March (India maintained its winning run). The politics of gas pipelines also carried on along familiar lines.

India's Union minister for petroleum and natural gas Ram Naik made a statement that the much vaunted Iran-India gas pipeline would bypass Pakistan and take the deep sea route. Three days later Naik's counterpart in Pakistan, Noraiz Shakoor Khan, invited India to join the Turkmenistan-Afghanistan-Pakistan pipeline project. Quite predictably, there was no response from India.

Energy analysts and government officials in Delhi pointed out that no oil company has evinced fresh interest in either project. Experts also say that the viability of prospective gas pipelines depends on the price at which the Reliance Group will sell gas from its recent find in the East Godavari basin.

Pre-feasibility estimates have shown that the cost of gas transported through a deep-sea pipeline from Iran to India would be between two to 10 times more expensive than an overland pipeline. Many doubt if the technology for such a pipeline exists at all, and Pakistan's petroleum secretary, Abdullah Yousaf, noted as much on February 23.

Iran, meanwhile, is aggressively pushing the pipeline project, with President Mohammad Khatami stating during his recent India visit that gas export was high on the agenda. Khatami had also gone to Pakistan in December 2002. Iran has, for long now, lobbied for an overland 'pipeline of peace', estimated to cost us $3.5 billion, through Pakistan to energy-starved India (see map).

Pakistan has repeatedly offered safe passage for the gas in exchange for transit fees, running into millions of dollars. India has turned down the deal for security and diplomatic reasons. Industry insiders say Naik's statement, however farcical, was an effort to be courteous to Iran without appearing to compromise with Pakistan.

India's decision to have no truck with its neighbour has also prevented the realisation of the pipeline from the world's third largest gas field of Dauletabad in Turkmenistan to Pakistan. "Since the viability of this project depends on the extension of the pipeline to India, it was decided to formally invite India to join the project," said Khan on February 23 at a press conference. The deputy prime minister and petroleum minister of Turkmenistan were also present, along with the Afghanistan mines and industries minister. Representatives of the Asian Development Bank too were at the conference. The bank has offered us $1 million for a feasibility study.