In a landmark judgment for cancer patients, Indian patent office has allowed generic drug manufacturer Natco Pharma Ltd to make and sell an anti-cancer drug Nexavar patented by Bayer Healthcare of Germany. This is the first ever compulsory license issued to a generic drug company in India to legally manufacture a drug while the patent is still operational. 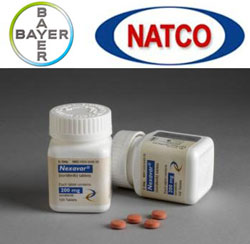 The Controller General of Patents Designs and Trademarks in Mumbai in its March 12 order permitted the Hyderabad-based pharma company Natco Pharma to manufacture and sell the drug Sorafenib which is used for the treatment of primary kidney and advanced primary liver cancer that cannot be removed by surgery.  The drug can extend the life of kidney cancer patients by 4-5 years and in liver cancer patients by 6-8 months. Bayer sells Sorafenib under the brand name Nexavar.

Natco had filed an application for the license last year on July 29. According to World Trade Organization (WTO), in Compulsory licensing (CL), a government allows a company to produce a product or process patented by another company without the consent of the patent owner. It is one of the flexibilities on patent protection included in the WTO’s agreement on intellectual property — the TRIPS (Trade-Related Aspects of Intellectual Property Rights) Agreement.

At least 100,000 people suffer from different types of renal cell carcinoma and hepatic cell carcinoma in India, according to Natco and cancer patient support groups. Of these around 8,000 are in the advanced stages of these cancer. Further, every year, 30,000 new patients are diagnosed with both the diseases in India and nearly 24,000 patients die every year.

Natco in its application stated that Bayer is supplying the medicine through imports and has failed to take adequate steps to manufacture the product in India. As a result, the drug is available only in limited quantities through pharmacies attached to a few big hospitals in metros. Reportedly, the number of imported bottles of Sorafenib in 2009 was only 166.

Bayer is also charging an exorbitant price for the medicine, making the product out of reach for most people who need it. It is selling the drug at Rs 2.8 lakh per month per patient. Natco sought the CL to sell it at a far cheaper price of Rs 8,880 per month per patient. “We will also provide the drug free of cost to around 600 patients annually,” says M Adinarayana, company secretary, Natco. “The price of a life-saving drug has to be determined keeping in view the purchasing power of the public,” he adds. According to 2009 estimates of planning commission per capita purchasing power of an Indian is Rs 58,500 annually.

The Indian patent office, in its order also noted that “reasonable requirements of the public with respect to the patented invention have not been satisfied in this case and consequently a compulsory license be issued to the applicant under section 84 of the Act.”

Patient support groups and public health activists hail the decision and say it will set precedent for overcoming drug price barriers. “Behind this action is the idea that the public has a right to access innovative health products and should not be denied the right due to excessive prices,” says Michelle Childs, director of policy and advocacy at the international non-profit, Medicines sans frontiers (MSF). More generic companies now should come forward to apply for the compulsory licenses including those for HIV medicines, says Tido von Schoen-Angerer, director, MSF.

Before filing the application Natco under section 84(5) (iv) of the Patents Act also tried to persuade Bayer to provide it with a voluntary licence to manufacture the drug. Under the Act six months is provided as a reasonable time period for such efforts. Natco initiated the process through a letter dated 6 December, 2010 and received a refusal from Bayer on December 27, 2010. Following this Natco filed an application for CL with the patent office. The last hearing on the matter was held on February 28-29, 2012.

According to non-profit Third World Network, Bayer has opposing the CL application, citing technical and substantial issues. In its submission to the patent office, the company justified the exorbitant price of Sorafenib saying it is the price of the innovation which requires huge investment in research and development as against the applicant who merely copies the drug. Bayer asserted that it has the right to determine what constitutes a “reasonably affordable price”.

Bayer also indirectly attacked Section 84 (1) (b) of the Patents Act by stating that “if a high price of the patented drug with huge investment in research and development by an originator is a good enough argument for the applicant to request for the grant of Compulsory License, it will always be applicable and will always circumvent the objective of the Patents Act, which cannot be the intention of the legislature”.

However, the patent office overruled the arguments made by Bayer representatives and decided in the favour of applicant.

According to public health activists will go a long way in securing low-cost life saving medicines for those who cannot afford the treatment.