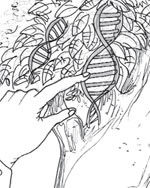 In a scientific breakthrough, researchers at the Centre for Cellular and Molecular Biology, Hyderabad, have determined the function of certain elements, called simple sequence repeats or micro-satellites, in the human genome. The findings will help develop genome-based personalised medicine for gene therapy for various genome-based disorders, including certain types of cancers.

The study titled "GATA simple sequence repeats function as enhancer blocker boundaries" appeared in May 14 issue of journal Nature Communications. It has finally illuminated the function of a particular portion of the human genome which has been a mystery for decades.

The genome of any living organism is composed of a collection of genes, made up of sequences of coding DNA which contain the hereditary information. Of the 3.3 billion nucleotides (building blocks of DNA) in the human genome, less than 2 per cent codes for proteins which make up the various parts of the human body. The remaining, more than 98 per cent, of the genome is referred to as non-coding. Different groups of nucleotides in this remaining 98 per cent perform different functions. Decoding these functions has been a big challenge to the scientific community, and scientific research has been gradually finding functional aspects of these parts.

In their recent paper, the CCMB researchers have established the function of a particular part of the non-coding genome called the GATA simple sequence repeats. “We found that the function that these elements perform is forming the boundary between different genes. In that sense, they functionally segregate different domains of the genome that contain genes needed in different tissue types,” says Rakesh K Mishra, lead author of the paper.

Mishra explains that our digestive system can digest the proteins that our body is made of. “By that logic, our own body should digest us. But that does not happen because in each part of our body, only some parts of the genome are functional. This gives a specific purpose to specific organs and other body parts. Much of this crucial regulation comes from the non-coding part of the genome, which includes repetitive DNA,” says Mishra.

Some genomes are able to ensure the formation of boundaries between different types of genes. But if this function is not carried out correctly, it leads to the misregulation of genes and results in genome-based diseases. Genome-based diseases are those in which large number of genes, several hundred, get misregulated.

“Misregulation can happen for many reasons. Ageing is one of them. When a person is young, genetic information is clearly defined. But as a body ages, this tight arrangement, where boundaries are very important components, starts to crumble. A large number of genes start expressing abnormally and people start to get many disorders, including neurological disorders,” says Mishra. This makes the elderly prone to diseases like Parkinson’s disease and Alzheimer’s disease.

The researchers from CCMB found that the genomic elements show variations in the populations. According to Mohan Rao, director of CCMB, such variations may have important implications in susceptibility and disease conditions, and may contribute to the development of personalised medicine. These boundary elements may also be helpful in designing efficient gene therapy applications.

“Our paper does not mention a therapy to treat any of the diseases. But now that the elements which lead to misregulation of genes are known, further research in medicine can find a cure for them. That is the main importance of the research,” says Mishra.