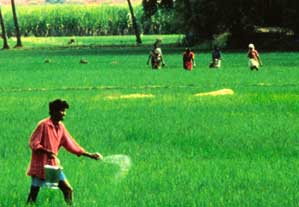 In June this year, the government revoked a proposal for giving fertiliser subsidies to farmers instead of giving payouts to fertiliser manufacturers directly, which is the prevailing practice. The department of fertilisers, Union ministry of chemicals and fertilisers (mocf) had constituted a committee in 2000 under the chairmanship of economist Y K Alagh to review the state of fertiliser subsidy and production. The committee had recommended changing the current subsidy regime in favour of farmers.

The government says disturbing the status quo will involve a complete overhaul, which is not feasible. One senior official in m o cf claims it is much easier to provide subsidies to industry because it has clear data about how much fertiliser is sold. Industry is obviously overjoyed. Bhanu Swaminathan, additional director, environment and safety, Fertilisers Association of India (fai), believes that direct subsidies will cause bigger headaches for the government than for industry, as there will be infrastructure-related problems then. For instance, the task of distributing small amounts of cash to thousands of farmers would lead to huge amounts of paper work.

Another point that the government and industry raise is that direct subsidy will increase corruption and inefficiency, as is the case with the public distribution system. Whatever conditions this system operates under, experts, however, point out to draw conjectural relations with the fertiliser industry is completely fallacious. They say that the industry-targeted subsidy regime is riddled with corruption anyway. All that a fertiliser unit has to do to rip the government off is fudge figures on how many bags of fertilisers it has offloaded.

About the problem of reaching out, food and trade analyst Devinder Sharma makes an important point. "When voter id cards can reach places like Ladakh without problems and delays, why not subsidies?" he asks. Farmers can collect subsidy payments from banks or post offices, he adds.

Sharma alleges that the rollback has happened because the fertiliser industry lobby is powerful and farmers are not.

A study by the National Institute of Public Finance and Policy (nipfp) showed that over the past 20 years nearly 38 per cent fertiliser subsidies have gone to industry and only 62 per cent has trickled down to farmers. And obviously, rich farmers benefit the most from this trickle-down effect. The subsidy delivery system is also flawed. Subsidy is the difference between production costs plus margins (12 per cent return on investment) and the government-fixed minimum retail price. This means the government pays bigger subsidies to more inefficient producers. In another issue, the need for subsidies arises, partly, from the fact that the international price of the key ingredient in fertiliser production, naphtha, has been going through a secular rise over the past decade.

Kishan Bir Chaudhary, executive chairman, Farmers Forum, says, "Direct subsidies to farmers will allow them to choose the lowest priced product in the market. This will wipe out inefficient producers automatically." Agricultural economists also say that subsidising farmers will reduce the subsidy load drastically because the government won't pay for the margin. Whatever the progress of liberalisation, it is probably safe to say that subsidies aren't going to go away just yet. And the people who make the loudest noise about loan melas are probably the biggest beneficiaries.

According to Ram Vilas Paswan, Union minister for fertilisers and chemicals, the estimated fertiliser subsidy for the annual crop year 2006-2007 is Rs 25,600 crore, which is just under the value of food crop exports. According to the Indian Farmers' Fertiliser Cooperative, if India has to match China's fertiliser consumption of 300 kg per ha, it will have to increase fertiliser use by 195 kg per ha. Meaning, the government will have to spend Rs 79,000 crore extra on subsidies a year.

Not surprisingly, experts say subsidies should be done away with completely. O P Rupella of the International Crop Research Institute for Semi-Arid Tropics, says: "Our agriculture has suffered from overuse of pesticides. Now increased fertiliser use can spell disaster. Organic farming is the way ahead."