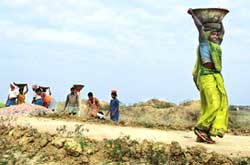 Moreover, studies and media reports brand the scheme inefficient and say that it discriminates against Muslims in Gujarat. Besides, the upa government claims that while the opposition is trying to hijack the scheme in some states, it is also trying to gain political mileage out of it. The scheme guarantees 100 days of unskilled manual work in a year to any adult member of a rural household (see 'Impotent Plan?', Down To Earth, April 30, 2006).

Other reports on the scheme's output are not encouraging either. The society for Participatory Research in Asia (pria) conducted a survey on the implementation of the rural employment scheme in 11 states -- Andhra Pradesh, Chhattisgarh, Haryana, Himachal Pradesh, Jharkhand, Madhya Pradesh, Rajasthan, Uttar Pradesh, Bihar, Uttaranchal and Kerala. According to the study, low awareness, delay in issuance of job cards and registration, discrimination on the basis of gender and caste are predominant.

Although the National Rural Employment Guarantee Act makes it mandatory for states to form their respective state schemes, Uttaranchal, Haryana and Rajasthan are yet to prepare them. State employment guarantee councils have not even been set up in Haryana, Himachal Pradesh, Jharkhand, Uttar Pradesh and Uttaranchal. Some states are crippled by lack of manpower. Minimum wages disbursed in different states also vary (see box: Messy affair

However, one crucial aspect that goes amiss in such reports is the larger picture -- the role of the rural employment scheme in poverty alleviation and asset building. pria's study shows that Andhra Pradesh has prioritised work on sc and st land for irrigation and land development. 20 per cent of the value of works in a village would be on plantation work and roads shall be given the last priority, not exceeding 10 per cent of the total value of works taken up, as per the state.

The report supports such prioritisation and suggests that unless such measures are taken seriously, the scheme will not be able to improve conditions of the most deprived lot. "But more importantly, some of these guidelines should be spelled out at the zila parishad level and not at the state level," said George Mathew, Director -- Institute of Social Sciences.

Mathew added that the success of the scheme could be assured only if the responsibility of implementation is given to the elected representatives, that is the panchayats and not the block development officer or the gram sewak. "Bringing the implementation to a halt for a review is completely unacceptable and very demoralising. There is no reason why the scheme and review cannot go on along side each other," he said.

It would be naive to believe that the implementation process was brought to a sudden halt just to review it mid-way. While the reason for such a step may not be clear yet, what is clear is there is a pronounced question mark to not only the scheme but also on the future of rural youth waiting for jobs out there.