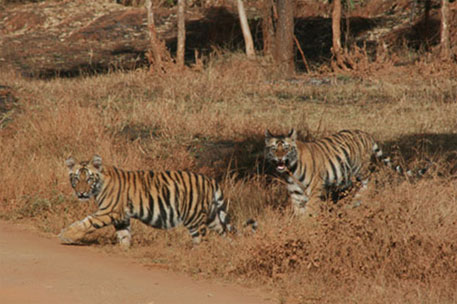 Wildlife protection measures initiated by the Indian government post 2006 when all the tigers from the Sariska reserve in Rajasthan had disappeared, seems to be paying dividends. The latest official estimate of the number of tigers in the country reveals that the wild tiger population in India has increased by 30 per cent in the past four years. The total number of tigers estimated in 2014 is 2,226 (in the range of 1,945 to 2,491), as against .

As per the “Status of Tigers in India, 2014” report, released by the National Tiger Conservation Authority (NTCA) on January 20, except for the states of Andhra Pradesh, Odisha and Jharkhand, most of the tiger-range states have shown a substantial increase in tiger population (see table). The report claims to have photographed 1,540 unique tigers (70 per cent of the estimated population) through camera traps while the remaining are estimated on the basis of statistical and scientific models from areas where camera traps could not be placed.

India now hosts 70 per cent of the world’s tiger population which has declined by over 90 per cent in the past fifty years. Indian tiger numbers had hit an all time low of 1,411 in 2006 with a complete wipe out in the established tiger reserves such as Sariska in Rajasthan. The current estimate shows that from then onwards the tiger population in the country has been increasing at a rate of 6 per cent per year.

“This is a very healthy and natural rate for any carnivore population to grow in a healthy ecosystem. This proves that most of the tiger habitats are still in a good condition. The single most important factor that has contributed in the growth is the control on poaching due to strict protection measures,” said Y V Jhala of Wildlife Institute on India, one of the principal investigators for the report.

Geographically, the Shivalik Gangegtic plain, which consists of the Corbett, India’s first tiger reserve, in Uttarakhand, and Plibhit and Valmiki tiger reserves in Uttar Pradesh and Bihar respectively, have shown a remarkable increase in tiger numbers from 353 in 2010 to 485 in 2014. “The credit for this goes to the conservation efforts in Corbett. The tiger population here is acting as a source population and dispersing in the adjoining forests,” says S P Yadav, deputy inspector general with NTCA.

In the Central Indian Landscape and the Eastern Ghats, tiger numbers have increased substantially in Madhya Pradesh and marginally in Maharashtra and Rajasthan. However, the number of big cats continues to decline in northern Andhra Pradesh, Odisha and Jharkhand. Officials at NTCA hinted that Naxalite insurgency is affecting the surveillance of forests by the forest staff. The increase in tiger numbers in Chhattisgarh is due to additional assessment of tiger population from the Indravati tiger reserve which was never surveyed in the past 12 years.

In the Western Ghats, both the population and the tiger ranges have increased. Karnataka, Kerala and Tamil Nadu have registered an increase in tiger population while Goa, which did not have tiger presence till seven to eight years ago, have a persistent presence of about five tigers. Tigers in the contiguous forest patches, comprising of Mudumalai, Bandipur, Nagarhole and Wayanad tiger reserves in the Western Ghats, have the world’s single largest tiger population, estimated to be over 570 tigers.  The northeasten landscape has also shown a remarkable increase in the tiger population with Kaziranga National Park having the highest numbers.

While most of the habitats might be reaching their carrying capacity with the increase in tiger numbers, the report says that forests of Sanjay and Guru Ghasidas forests on the border of Madhya Pradesh and Chhattisgarh, Kawal and Srirailam forests in Andhra Pradesh and Telangana, Simlipal and Satkosia tiger reserves in Odisha,  Manas reserve in Assam, Buxa reserve in West Bengal, Palamau reserve in Jharkhand and Achanakmar and Indravati tiger reserves in Chhattisgarh, still have potential of increasing tiger population. “If conservation efforts are focused on these landscapes, together they can support an additional population of at least 1,000 tigers,” adds Jhala. He, however, adds that the future of tiger conservation will depend on ensuring a healthy gene flow between these tiger populations, for which securing corridors between the tiger habitats will be crucial in the future.

Status of tigers in India 2011

Guidelines under section 38-0 (c) of the Wild Life (Protection) Act, 1972 for project tiger