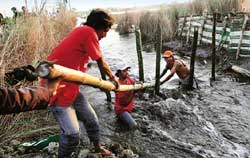 The Indonesian government has decided to dump tonnes of hot mud, which forced at least 10,000 Indonesians out of their homes, into the Java Sea. The foul-smelling mud has been spurting from a crack in an exploratory oil well in East Java province since May.

More than five million tonnes of toxic mud has been spitted out swamping villages, factories, schools, paddy fields and shrimp firms; at least four villages have been inundated. Engineers are striving to halt the mudflow, but dykes built to contain it have been breached several times in recent weeks. In the latest of such disasters, on September 25, the steaming mud swept dykes around village Besuki and forced residents to take shelter on a highway.

The mudflow started to from a gas exploration well near the coastal city of Sidoarjo, about 700 km east of Jakarta, on May 29. The accident reportedly occurred while the multinational firm Lapindo Brantas was drilling the exploratory well. Experts fear that the drilling punctured a 2,700-metre-deep geological formation, releasing an unprecedented volume of pressurised steam and water carrying mud to the surface. Local media quoted Rudi Rubiandini, a petroleum engineer and adviser to Indonesia's ministry of environment, saying that the well passes through a thick clay seam from 500 to 1,300 meters, then sands, shale, volcanic debris, and into permeable carbonate rock. Highly pressurised hot water and steam from the carbonate formation appear to have broken out below the point where the drilling equipment was stuck in the well and thus either eroded a channel to the surface or followed natural fractures. The water rising has been eroding layers of clay, releasing 50,000 cubic metres of mud every day.

Experts term the incident as the latest example highlighting Indonesia's poor environmental record in exploiting resources. On the other hand, some scientists also believe that the mudflow could have been a natural phenomenon, caused by a build up of pressure under the earth, which could make it impossible to stop.

The ongoing crisis has, however, compelled the local government of East Java province to allow channelling of the muddy water into a nearby river, local media reports note. But environmental groups are concerned about the grave impact of the toxic mud on marine life. As of now the Indonesian government is in a fix: it is a difficult choice between fouling additional land and the sea.