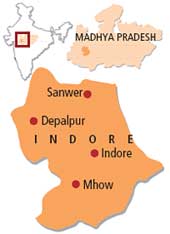 Indore’s soil is malnourished Vital nutrients missing: study liberal doses of synthetic fertilizers may increase farm productivity for sometime but they are bad for the soil’s health.

Studies conducted in the four tehsils of Indore district in Madhya Pradesh revealed injudicious use of fertilizer is causing nutrition deficiency in the region’s soil.

The survey conducted by Indore Agriculture College in 504 villages found 70 per cent soil samples deficient in sulphur and 50 per cent deficient in zinc. U R Khandkar, head of the soil department, said over-use as well as erroneous use of synthetic fertilizers caused the deficiency. For instance, soybean, the major crop in Malwa region, needs sulphur. But the manner of application of fertilizers does not fulfill this need. As a result, crops absorb more sulphur from the soil, depriving the soil of the vital nutrient.

Khandkar said the practice prevalent in Indore district and parts of Malwa is to use a single large dose of Di Ammonium Phosphate (dap) just before sowing soybean. dap supplies only two nutrients—nitrogen and phosphorous. So, the soil becomes deficient in potash and other nutrients. Khandkar also observed that mechanized farming has led to disappearance of organic farmyard manure which improves soil structure and increases its water-holding capacity. “This in turn enhances microbial activity and raises nutrient availability,” said Khandkar. He cautioned against complete shift to organic compost as it may not contain sufficient quantities of nutrients to meet commercial farming targets. “The best solution is to combine organic compost with scientific application of synthetic fertilizers based on soil test results and accompanying recommendations,” he added.