A United Nations report highlights the connection between environment and health 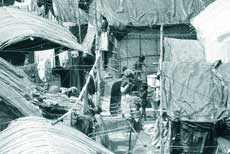 communicable diseases cause 20-25 per cent of deaths annually worldwide. And poor environmental conditions are the perfect breeding ground for these contagions. This indissoluble link, showing how ecological imbalances can be hazardous to health, has been brought forth in the 'State of World Population 2001' report released recently by the United Nations (un).

It has been pointed out that changes in land use can fuel the spread of such diseases. For instance, clearance of tropical forest cover causes rainwater to accumulate and this is an ideal habitat for mosquitoes. Malaria kills over one million people and results in some 300 million new clinical cases each year. Besides, infections are spreading in urban areas due to crowded living conditions. In the poorer and congested pockets in cities, children are four times more likely to die than infants in more affluent neighbourhoods.In rural areas, maternal mortality due to pregnancy-related complications is on the rise due to the absence of trained doctors and nurses .

According to the report, if better transport has helped improve trade links, it has also contributed towards the spread of hiv and aids . Lorry drivers carry these sexually transmitted diseases from one place to another. Similarly, cholera has travelled from Bangladesh to Chile in the ballast tanks of a freighter.

While revealing that air pollution kills 2.7 million people every year, the report highlights that such emissions also reduce food production and timber harvests by affecting photosynthesis. It is estimated that us $4.7 billion in agricultural production in Germany is lost due to high levels of sulphur, nitrogen oxides and ozone. Indoor air pollution -- soot from burning wood, dung, crop residues and coal for cooking and heating -- kills more than 2.2 million each year, mostly women and young girls in the developing countries. Poor sanitation and polluted water take their toll on 12 million human lives annually.

Women's reproductive health is also affected by exposure to toxic agricultural and industrial chemicals and organic pollutants. These impair pregnancies and cause congenital problems. Exposure to nuclear radiation, heavy metals and persistent organic pollutants has genetic impacts, says the document. In the last 100 years, almost 100,000 new chemicals have entered the environment and found their way into air, water, soil and food and humans. One category of these chemicals, endocrine disrupters, is suspected to be a cause of human reproductive disorders and infertility (see box: Toxic threat ).

The report has suggested that countries should invest more in public health to meet possible hazards. It has underscored the dependence of human health on environment (see Down To Earth , Vol 10, No 12, November 15, 2001). Good environmental conditions spawn good health. The tag-line: go green to stay in the pink.