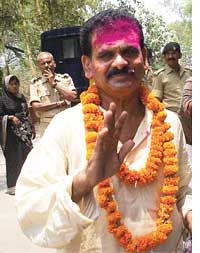 There was a price on his head just a few years ago; Bihar, Jharkhand and Uttar Pradesh had together declared a reward of Rs 5 lakh for anyone helping in his arrest. Today, the head is held high--albeit in Bihar's Sasaram jail, where he has been lodged for the past four years.

Kameshwar Baitha is perhaps the first Maoist (allegedly) to become member of Parliament. Elected from Palamu in Jharkhand last May, Baitha contested the election from behind bars on a Jharkhand Mukti Morcha (jmm) ticket.

As supporters troop into Sasaram jail with garlands of marigold, Baitha appears at a window of the mulaqati kamra, the meeting room. He speaks to his visitors from the other side of a wire netting. That is how far prison rules will allow him to meet his visitors, bursting with enthusiasm.His supporters try, with little success, to squeeze in the garlands through the wire netting. "Let it be. There is no need for garlands. Here they call me murderer; they are preparing a noose of legal tangle to hang me," said Baitha, his voice pensive.

An MP for only two months, Baitha, 45, looks every bit a seasoned politician in his stiffly starched, white kurta-pajamas. He is even adept at dodging pointed questions.


Baitha ponders, focuses his eyes on his palm for a few seconds and then replies with more questions: "Is it wrong to help the landless? Is it Maoism to fight for the rights of labourers and for the land ceiling act?" The rage in his voice is unmistakable. Then turning his clean shaven face towards his supporters Baitha gives in to rhetoric: "Brothers and sisters, listen to me. He wants to know whether or not I am a Maoist?"

Baitha claims his fight against state authority ensured justice to the poorest of the poor. "I am not a criminal and I am not a Naxalite. The police has implicated me in fabricated cases; the allegations are fictitious," he says.

Suddenly his face becomes animated and he bursts out: "Marx inspires me. I have understood the truth of his philosophy in my region. Landlords have vast expanses of land. There has not been any land reform here. I want to know what will happen to the landless."

There are 45 cases against Baitha. He has been accused of masterminding the massacre of six policemen in a land mine blast on the Bihar-Jharkhand border. "He is an expert in explosives. We have ample proof of his involvement in Maoist operations," claimed Vikash Vaibhav, superintendent of police, Sasaram.

Baitha was arrested near Patna in 2005 by a special task force comprising policemen from Bihar, Jharkhand and Orissa. Intelligence reports claim he was expelled by Maoists.

Putting the past behind him, Baitha claims he will now fight to resolve the issue of Naxalism in Parliament. "Let me tell you Naxalism cannot be countered with guns, it is a social problem," he says, adding that the way the government is dealing with it will only make matters worse. "When you have a wound you don't poke it with a knife, you use balm instead. Insurgent groups should be invited for talks. And a policy should be prepared to counter issues and problems that spread Naxalism," he says.

Crossing over to the other side does not give Baitha a moral hangover. With a full-throated laugh he says: "One thing that I have learnt is that many things can be solved by being part of the system. Feudal forces need to be wiped out. You can't handcuff people's voice. Feudalism and capitalism must end," says the newly elected MP.