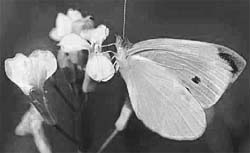 it has long been assumed that while searching for nectar, the cabbage butterfly lights on random flowers. However, the butterfly is more selective than it would appear. It can remember the colour and shape of flowers that have provided an abundance of sweet liquid on previous landings, according to the findings of Ikuo Katori, an assistant researcher at the agriculture department of Kinki University in Japan.

Katori conducted an experiment using 21 cabbage butterflies, which were divided into three groups according to the type of conditioning they received. Each butterfly was put into a cage containing the butterfly's favourite daisy fleabane flowers. The flower resembles a wild chrysanthemum and yields nectar only when the central part of the flower has reached maturity and turns yellow. Each flower was at a different stage of maturity.When released into the cage, the first four butterflies, who had not been exposed to any flower since they were hatched, chose to alight on premature flowers an average of 4.2 times in the first 10 trials. As they gained experience, however, the frequency of mistakes declined. After more than 50 trials, they very rarely landed on the premature flowers. Eight butterflies in the second group were familiarised with daisy fleabanes in advance. When each of those butterflies was released into the same cage, Katori said, most never chose premature flowers. Then nine butterflies in the third group were raised in an environment with flowers excluding the daisy fleabane.

When released into the cage, they selected premature daisy fleabanes an average of 2.6 times per 10 trials. "The butterfly has an ability to learn," Katori said. "It can discover particular signs that indicate the presence of nectar no matter what the flowers are." Katori then counted their success at finding the nectar after they settled on the flower. The nectar of the fleabane is located deep inside the flower. The pattern of the results was virtually the same. Also, the average amount of nectar collected in the first five minutes by the 12 butterflies familiar with daisy fleabanes was twice that collected by the 10 inexperienced butterflies. The findings indicate that the butterflies can learn.

Therefore, it is evident that they could remember a particular colour for more than four days. Katori's study marks the first case in which it has been verified that a butterfly has the ability to learn. "I am amazed at the hidden ability of the cabbage butterfly," said Naota Osaki, an assistant professor at Kyoto University who specialises in butterfly behaviour. "The butterfly is generally considered to be strictly instinctive. In fact, it draws on its experiences to improve its food-gathering efficiency."