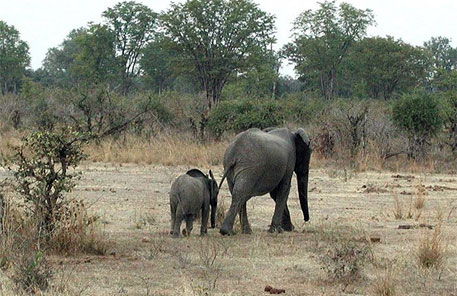 There has been a storm of protests from international organizations and conservationists after news broke recently that the government of Zimbabwe had captured Ã”Ã‡Â£dozensÃ”Ã‡Ã˜ of baby elephants and was in the process of shipping them to China and/or the UAE.

Reports about the capture of the babies broke in late November, in a report by an activist group called Zimbabwe Conservation Task Force, according to an article in the National Geographic magazine.

The task force has alleged that China has "ordered" a number of baby elephants and other wild animals from Zimbabwe. Johnny Rodrigues, an activist who leads the group, says that at least 36 elephants have been captured, along with 10 lions and 10 sable antelopes.

Rodrigues told National Geographic that he was tipped off about the export scheme by tourists and local Zimbabweans on holiday in Hwange National Park. He said the group saw a helicopter and heard shots being fired that separated mother elephants from their calves.

"The babies can't keep up," Rodrigues says, "and then they're captured."

Rodrigues dispatched an investigator to the scene, who "witnessed the baby elephants and interviewed people in the area and managed to get all the information we needed."

The investigator was told that the animals would be taken by truck to Mozambique and then put on a livestock sea freighter bound for China.

The elephants are reportedly being held in a capture unit outside Hwange's main camp.

The National Geographic article said that in two separate interviews to media outlets including the British daily, The Telegraph, Zimbabwe officials had confirmed the capture of elephants but had claimed that the elephants would be shipped to the United Arab Emirates (UAE), and not China.

In her remarks to National Geographic, Joyce Poole, the co-founder of Kenya-based ‘ElephantVoices’, a research and advocacy organization expressed horror—and dread—over the prospects for Zimbabwe's baby elephants if they were indeed to be exported. "For elephants, being held captive for decades in a circus or in the majority of the world's zoos is gruesome. It's a fate worse than death."

Speaking to the magazine, David Coltart, Zimbabwe's former minister of education, sport, arts, and culture and now a senator with the Movement for Democratic Change, the party in opposition to Zimbabwean President Robert Mugabe's ruling ZANU PF, said he was not surprised to hear that Zimbabwe was exporting elephants.

"The government is desperate for foreign exchange and revenue," he said. "Furthermore, we have seen such rampant abuse of our wildlife in the last 14 years that this would be consistent with what the ZANU PF Government has done during this period ... There is very little 'wildlife management' left in Zimbabwe. Whilst there are dedicated individuals in national parks, wildlife has been plundered by a predatory regime."

Johan du Toit, a third-generation Zimbabwean and professor of ecology and conservation of large mammals at Utah State University, in Logan, United States also blamed corruption in the Mugabe regime. "I don't think the way wildlife is being managed is indicative of the Zimbabwe ethos," he said, "but that the kleptocracy and the elitists within the government see the resources of the country as up for grabs—even to the extent that they think if they don't grab it, someone else will."

Other conservationists and organisations have vowed to oppose Zimbabwe’s action.

Chunmei Hu, who works at Nature University, an environmental group in Bejing, told National Geographic that his organizations had not received official word that China was about to receive numerous baby elephants from Zimbabwe. But if it did, the group would lodge a protest.

The Asia for Animals Coalition—a coalition of animal protection groups—is preparing to send high officials in China, the UAE, and Zimbabwe, separate letters protesting the reported export of Zimbabwe's baby elephants, lions, and sable antelopes. The letters have been signed by various combinations of 189 organizations around the world.