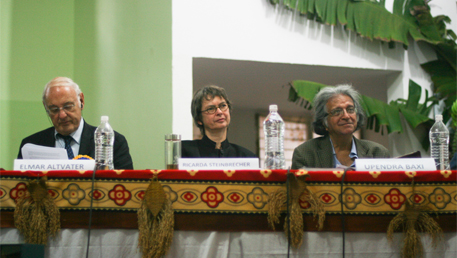 The six-member jury headed by Upendra Baxi, professor of law at Warwick University in the UK, gave the decision. The tribunal's session from December 3 to 6 was held on the request of the Pesticides Action Network (PAN), an international network of NGOs, which had asked the tribunal in 2008 to investigate how activities of the transnational corporations (TNCs) were causing "massive deaths, terrible harm to health, plunder of the environment and destruction of ecological balance and biodiversity".

During the public hearing, PPT was presented with technical reports and individual testimonies on the themes which had been brought to its attention. These included a range of violations of human rights by the different actors (TNCs, states and international agencies): threat to food sovereignty, health implications because of the failure to control dangerous pesticides, complicity between TNCs, national governments and the scientific community. The tribunal also looked into the violation of rights of women and children and qualified the facts with respect to international law convention, treaties and instruments.

The tribunal studied and held cross examination in cases such as that of Silvino Talavera, a 11-year-old from Paraguay who died in 2003 days after breathing in a cloud of Monsanto’s Roundup herbicide sprayed by a crop duster. They also studied the casualty and adverse health impact of the pesticide endosulfan on people of Kasaragod district in Kerala state in  India and the Bhopal gas leak tragedy.

The cases showed how agrochemical TNCs have violated the right to health and life of people, by manufacturing and distributing pesticides which are toxic and have irreversible effects on human health and the environment and the horrendous conditions of use, especially in farms and plantations in third world countries where regulations are most lax.

Worldwide, it is estimated that 355,000 people are killed every year because of exposure to pesticides, which means that a thousand men, women, and children die of it every day. The Bhopal tragedy of 1984, instantly killed almost 8,000 people and poisoned over a few hundred thousand  who are suffering to this day. The company, the Union Carbide Corporation, subsequently taken over by Dow Chemical, however, managed to escape the full extent of its criminal and civil liability.

Giving the verdict, president of the jury, Baxi said that the evidence presented before the tribunal shows that the six TNCs are responsible for gross, widespread and systematic violations of the right to health and life. “The corporations responsible for their systematic conduct have resulted in violation of indigenous peoples’ human rights and other entitlements. Their systematic acts of corporate governance have caused avoidable catastrophic risks, increasing the prospects of extinction of biodiversity, including species whose continued existence is necessary for reproduction of human life,” said the jury.

The jury members said three states—the US, Switzerland and Germany—have failed to comply with their internationally accepted responsibility to promote and protect human rights, especially of vulnerable populations. The three states were found guilty on the grounds that the six corporations are registered and headquartered in their territory and the governments have failed to adequately regulate, monitor and discipline these entities through national laws and policy. The concerned states have unjustifiably promoted a double standard approach, prohibiting the production of hazardous chemicals at home while allowing their own TNCs unrestrained license in other states, especially the global south.

The Tribunal found there were concerns relating to global governance institutions too. It said that the policies of World Trade Organisation (WTO) in relation to Intellectual Property Rights (IPR), especially the hard regime of patent protection, is not balanced with any sincere regard for the grave long-term hazards to humans and nature already posed by the activities of agribusiness and agrochemical industries.
It observed that the international financial institutions have yet to develop policies concerning their support for hazardous manufacture, application, or process. “It is not entirely clear to us why a strict regime of human rights conditions is as yet not contemplated in this regard,” the tribunal said.

The tribunal asked the national governments to prosecute the  accused agrochemical companies in terms of criminal liability rather than civil liability. It has also asked governments to take action to restructure international law so as to make the agrochemical corporations accountable for their activity and products and to accept a less heavy burden of proof on the victims and to fully commit to and legislate for the precautionary principle. It also asked national governments to protect scientists, farmers and human rights and environmental defenders from harassment by TNCs. The tribunal urged scientists, lawyers and the regulator fraternity to be fully aware of conflict of interest and respect the information, good or bad, as a public good.