Introduction of ‘data exclusivity’ in pesticides Bill will affect farmers 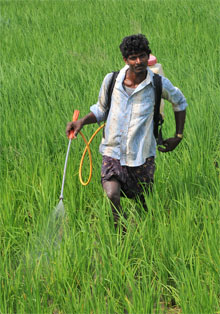 While the Centre failed to introduce the Pesticides (Amendment) Bill, 2008, in the budget session of the Parliament, which adjourned sine die on Wednesday, a clause in the text of the Bill poses a definite threat to India’s existing patent regime.

The pesticides Bill, which is supposed to replace the existing Insecticides Act, 1968, includes “data exclusivity” (DE) for agrochemicals which would delay the entry of affordable generic products in the market.

However, the introduction of DE has been a long-pending demand of multinationals, besides the removal of section 3(d) of the Indian Patent Act, 1970, which bars them from extending unwarranted patents.

Why is DE undesirable?

Multinationals have been pushing for exclusive rights to pharmaceutical test data submitted by them to drug regulation authorities. It is a must for agrochemicals and pesticides companies to submit data on the safety and efficacy of a new product to regulatory authorities.

If multinationals get exclusive rights, then they can keep data regarding a drug’s safety and efficacy confidential for almost five years.

According to experts, this will block competition because generic manufacturers, even if they want to register a drug, will not be allowed to show that their products are therapeutically equivalent to originator products.

Talking to Down To Earth, Medecins Sans Frontieres’ (MSF) Leena Menghaney said that if any product is given patent on data exclusivity, no approval to any other generic version can be granted for the next five years.

“This is even if the competitor proves that the physico-chemical attributes are equivalent to those of the first applicant’s product,” she added. MSF ensures the availability of medicines to the poor.

Earlier, secretary general of the Indian Pharmaceutical Association D G Shah had alerted about the government’s plan to introduce the Bill this session.

In a note written on a website dedicated to patents issues, he said, “The Bill has a provision that not only makes India’s Intellectual Property (IP) regime TRIPS plus, but would also eliminate competition and create legal monopoly for agrochemicals and pesticides, making them unaffordable to small farmers. The Bill proposes to introduce Data Exclusivity for a period of five years.”

The Agreement on Trade-Related Aspects of Intellectual Property Rights (TRIPS Agreement) sets the standards for intellectual property protection in the world today.

It came into force on January 1, 1995 and is binding on all members of the World Trade Organization (WTO). But nowadays, many developing countries are being pressurised to adopt TRIPS Plus, a step beyond TRIPS.

If India were to go TRIPS Plus and introduce data exclusivity for agrochemicals, pesticides and medicines, farmers and poor patients will be denied access to affordable products.

Experts say this is not an unexpected development. In the past few years, US multinationals, backed by their government and the United States Trade Representative (USTR), have been seen pushing the Indian government to grant patent on DE for agrochemicals and pharmaceutical products.

Experts have highlighted that granting DE would amount to a TRIPS Plus agreement, which will adversely affect farmers and reduce access to medicines in India.

The Bill was introduced by the previous government in which DE for agrochemicals was included. The Bill is still pending in the Rajya Sabha. The new government is under pressure from the US on introducing it, according to experts.