Invasive plant species like kudzu may be contributing to global warming 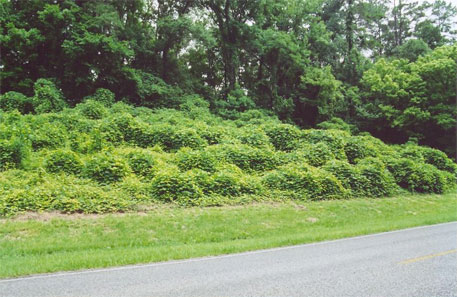 The impact of invasion byspecies like kudzu and Japanese knotweed on our ecosystem may be far more devastating than previously imagined. This has recently been revealed by a research conducted by scientists at Clemson University, South Carolina.

Researchers have concluded that the exotic plant species are affecting the carbon-storage capabilities of soil and releasing stored carbon into the atmosphere.

Introduced to North America in the early 1900s as a measure to control erosion, Pueraria lobata or kudzu has invaded a large part of southern North America. Its effects on the local ecology have been devastating as it is known to smother local species and kill them or stunt their growth.  Fallopia japonica or Japanese knotweed too has been recognised by the World Conservation Union as one of the worst invasive species. Its roots, extending up to 10 feet underground, are known to grow through concrete, thereby damaging roads and buildings.

In the paper, recently published in science journal New Phytologist, plant ecologist  Nishanth Tharayil and graduate student Mioko Tamura demonstrated the ability of these species to destabilise the carbon pool stored in the soil.  They found that kudzu releases carbon stored in the soil into the atmosphere while the knotweed causes the carbon in the surrounding soil to become prone to oxidation and thereby get released in the air. These findings are all the more alarming because it is well-known that soil stores more carbon than both the atmosphere and terrestrial vegetation combined.

According to Tharayil, kudzu’s invasion results in the release of 4.8 metric tonnes of carbon annually, equal to the amount of carbon stored in 4.7 million hectares of forests in the US. The amount is also the same as carbon emitted by consumption of 540 million gallons of petrol or burning of 5.1 billion pounds of coal.

It is also believed that climate change and the increase in global temperature will enable already flourishing invasive species such as these to thrive as northern ecosystems become more hospitable to them and help to further accelerate the release of carbon into the atmosphere.

The study also indicates that the incorporation of legumes such as peas, peanuts, beans and lentils can also accelerate the rate at which carbon is stored in the soil.