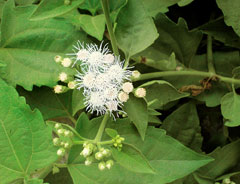 it is believed when invasive species are introduced in an area they inhibit the growth of local plants by producing chemicals. There is another recent theory that suggests that invasives work by changing the kinds of microbes in the soil. This phenomenon has been seen in the Western Ghats where a South American shrub has eliminated most vegetation. The study shows that the shrub produces a chemical, which attracts a fungus Fusarium semitectum. The fungus causes wilting of local plants and kills seedlings in the vicinity.

Chromolaena odorata, a shrub of the sunflower family, was introduced in India in the 1840s and is considered to be one of the most ecologically destructive invasives in the Western Ghats.

To confirm that the fungus was inhibiting plant growth, the group tried to grow local plants and the weed together in soils from which all microbes were removed, or sterilized. They found that the invasive did not affect the growth of the native plants in the course of their study.

Chromolaena root leachate was added to soils where the plant did not grow. The result was there was an increase in the Fusarium spores density which inhibited growth of the local plants.

"The fungi produce toxic chemicals that inhibit the growth of native plants more than they inhibit the invasive species. This is because the fungi are not adapted to the invasive," says Inderjit, one of the authors of the paper.

The study was published in the January issue of Journal of Ecology (Vol 96, No 1). "The next step will be to study other areas in the Western Ghats and also check if the phenomenon is true of other invasive species," Inderjit adds.