Even prior to the July attacks, health services in Gaza had been in steady decline because of Israeli blockade; hospitals were not performing routine surgeries for lack of funds, energy crisis 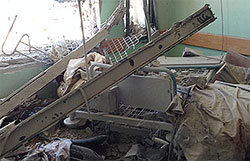 Israel's attacks on civilian buildings and infrastructure in Gaza, including health facilities, has been widely condemned by countries and civil society groups. In a public statement issued on Thursday, Amnesty International has said there is ample evidence that Israeli forces have been targeting medical workers and facilities in Palestinian territory.

"Amnesty International has received reports that the Israeli army has repeatedly fired at clearly marked ambulances with flashing emergency lights and paramedics wearing recognisable fluorescent vests while carrying out their duties," the statement claimed. Six medics have already died in the Israeli operation—Protective Edge—started on July 8. From July 17, attacks increased on health facilities and ambulances, the statement said.

According to the Palestinian ministry of health, at least six ambulance workers and 13 other aid workers have been killed as they attempted to rescue the wounded and collect the dead. Nearly 49 doctors, nurses and paramedics have been injured by such attacks. Thirty-three other aid workers were also injured. The ministry reported that at least five hospitals and 34 clinics have been forced to shut down because of damage from Israeli fire or continuing hostilities in the immediate area.

As of August 5, according to the UN Office for the Coordination of Humanitarian Affairs, 1,814 Palestinians had been killed in the Gaza Strip, 86 per cent of them civilians. More than 9,400 people have been injured, many of them seriously. An estimated 485,000 people across the Gaza Strip have been displaced, and many of them are taking refuge in hospitals and schools.

Hospitals across the Gaza suffer from fuel and power shortages, worsened by the Israeli attack on Gaza’s only power plant on July 29. They have inadequate water supply, and shortages of essential drugs and medical equipment.

The current attack has worsened the ailing healthcare system, which was already in a terrible state because of a seven year blockade imposed by Israel. Mads Gilbert, professor, University Hospital of North Norway, who has been working in Gaza since 2008 and written much the acclaimed book—Eyes in Gaza—submitted a report to the United Nations Relief and Works Agency (UNRWA) early July, days before the launch of operation Protective Edge. In the report, titled “Brief report to UNRWA: The Gaza Health Sector as of June 2014”, Gilbert informed that Al-Shifa, the largest hospital in Gaza, had stopped all planned surgeries from June 17, 2014. It further escalated this measure to perform only life-saving emergency surgery from July 1.

Such measures were taken because supplies and stocks of essential drugs, IV fluids, disposables, spare parts, lab chemicals and instruments could not sustain the medical and operational needs of Shifa Hospital. Gilbert wrote that availability of critically needed disposables and drugs of energy and fuel to run generators, ambulances and other vehicles was below the level for maintaining even the emergency medical services. Staff had not been paid salaries since March and received only 50 per cent of the salary for eight preceding months.

According to the World health Organization, the average waiting time for some types of elective surgery at Shifa was over a year, prior to the latest development.

Private hospitals like Al Quds Hospital in Gaza City, had better supply lines, stable staff salaries and had capacity for 10 elective surgeries daily. A fire broke out in the hospital after its building came under Israeli attack on July 17, affecting the treatment it was providing to the wounded.

Gilbert said that energy crisis was further affecting public health. “By January 2014, over 300 medical machines at hospitals were out of order, including the only MRI machine at Gaza European Hospital,” the doctor stated in the report. The energy crisis forced municipality authorities to sharply reduce or close key public sector services such as sewage processing, water wells pumps and solid waste disposal. Nearly 90 per cent of water in Gaza is unsafe for drinking. This has been posing serious threats to public health.

Gilbert wrote that the blockade imposed by the government of Israel remains the number one reason for the lack of development of Gaza’s once dynamic and trade-oriented economy. Construction work in Gaza, a main economic source of growth and jobs, has been severely affected with prices spiralling up to 300 per cent since June 2013.

Breakdown of economy affected Gaza’s tunnel trade badly. Gaza has a network of tunnels to carry out its day to day activities, avoiding Israeli aggression. Acute food crisis has led to malnutrition for the past many years. Last year, UNRWA provided food assistance to over 800,000 refugees. In comparison, in 2000, when the economy was functioning smoothly, only 10 per cent of refugees required UNRWA food aid.