IT's got the look 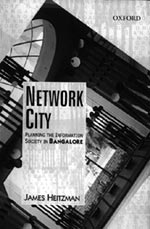 Network City explores the relationship between the emergence and growth of the information technology (it) sector in Bangalore during the 1990s and its effect on city planning. It responds to an elusive question that has gained critical attention in planning literature over the past decade: How does the evolution of an information-based society impact urbanisation and city development? Heitzman frames his work with a discussion of the characteristics of an information-driven society and the need to restructure management, referencing literature on globalisation and network theories.

Armed with a decade of research, Heitzman describes planning and development in a Bangalore where the it sector takes root and blossoms. He concludes that the sector catalysed a change in the structure of planning from traditional top-down governance into a network of organizations, with access to information as the fulcrum. He first traces Bangalore's growth -- and planning -- from its centuries-ago existence as a village to an important Indian metropolis by the early 1990s. The introduction of it into government planning then emerges: here, the private sector plays a critical role in encouraging the use of Geographic Information Systems (gis) tools. According to Heitzman, the government's lack of capacity to deal with the increasing demand to process information, alongside the private sector's efforts to become involved in planning, ultimately leads to a more participatory planning model. A hierarchical structure morphs into a complex interrelationship or network between the government and private players. Yet, even as a new set of relationships evolved with it as a platform, and a number of players emerged who now influence planning in the city, the structure still suffers primarily from the lack of an effective network. In other words, the network fails to be realised because there isn't a nodal agency to coordinate disparate players; this is precisely what paralyses urban planning in Bangalore.
Heitzman describes the increasing involvement of residents in debates regarding governance and provision of municipal services by focusing on the ward committees established as a result of the 73rd and 74th Constitutional Amendment acts. In this account, he overlooks the critical role these acts could have played in providing the critical link for the 'network city'. The Acts mandate a Metropolitan Committee be established to oversee implementation and enforcement of local plans. If this had been done, the networked planning structure Heitzman talks about would really have had solid shape. Further, his analysis misses two critical issues: why the private sector got into planning, and the crucial role of it, as an economy, that allowed such entry.

Rather than asking critical questions regarding the history he narrates, Heitzman maintains an apolitical or scientific approach to planning. For example, in describing development projects, including the Bangalore-Mysore Infrastructure Corridor, the new International Airport, and the kiadb-acquired campuses, he misses the opportunity to use these as evidence of the it sector changing the city's terrain. For these examples portray the nature of land acquisition and development that emerged, processes that enabled private players and government officials to pursue development agendas justified by the 'construction' of Bangalore as the 'Silicon Valley of India'.

At the end of the chapter entitled 'Becoming Silicon Valley' Heitzman notes that "Local players were quite avid in identifying a language that allowed the rationalization of a liberal economic agenda, exercising their agency in the crafting of a new urban space (emphasis added)." This statement could have provided an organizing framework for the material presented in this book: it is it as construct, and not the use of it per se, that drives the new planning policies.

Heitzman presents impressive data on Bangalore's planning, but fails to critically assess the events he describes and so provide insight into the role of the it sector in shaping the terrain of planning in the city. His account of planning that shaped the city lacks an analytical framework that would have provided coherence to his otherwise fragmented narration of events. Paradoxically, the reader is finally left to wonder what to make of the abundance of information he provides.