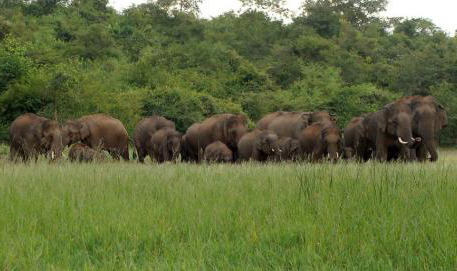 A recent research shows that in the past decade ivory has been mainly sourced from two areas in Africa—Tanzania and parts of Mozambique.

DNA sampling carried out by biologist Samuel Wasser of the University of Washington, has brought this fact to light. For pinpointing the origin of poached ivory, scientists matched the DNA fingerprint of ivory to the DNA profile of elephant dung. Dung was used to make the reference point, as it can be easily collected.

“We have developed methods to extract the same DNA from ivory, allowing us to determine (its) origin by statistically matching the ivory genotype on the reference map. Over 1,500 samples have been collected and (the) DNA has been extracted from 16 hyper-variable genetic markers,” Wasser told Down To Earth.

Wasser and his team analysed 28 ivory seizures, each weighing more than half a tonne, made between 1996 and 2014.

According to a 2013 annual report released by the University of Washington, a staggering 52,365 elephants were killed in the same year. The amount of ivory seized was approximately 46,500 kg.

“Some of these elephants may have been killed prior to 2011. However, given the amount of ivory being shipped annually we believe that this number is close to the annual total,” Wasser said.

“Around 50,000 elephants are killed every year. Elephants are keystone species and their loss could cause irreversible damage to the ecosystem and economy,” Wasser added.

Some of the trees in central African forests can only be dispersed by elephants. “Their loss may have severe impact on the climate. Elephants maintain an open canopy in Savanna habitats.”

When asked about the areas where ivory poaching is rampant besides Mozambique and Tanzania, Wasser said major hotspots also exist in northeast Gabon, Democratic Republic of Congo and southeast Cameroon.

More than 85 per cent of the Savanna elephant ivory seized between 2006 and 2014 was traced to East Africa, mainly from the Selous Game Reserve in south-eastern Tanzania and the Niassa Reserve in northern Mozambique. Large shipments of ivory have been traced to major trans-national organised crime syndicates, Wasser told Down To Earth.

“The terrorist involvement in the (ivory) trade has grown considerably and ivory is a great source of hard currency. If we can track poached ivory, we might be able to trace hotbeds of terrorist activity.”

On June 4, the Wildlife Conservation Society, a US-based non-profit that works on wildlife conservation, estimated that 96 elephants are killed every day in Africa and the increasing demand for ivory is fueling a brutal slaughter of African elephants.

According to the society, in Mozambique the elephant population has declined by about 10,000 in just five years, which is a staggering 48 per cent drop.

Northern Mozambique was the hardest hit, accounting for 95 per cent of elephant deaths, reducing the population from an estimated 15,400 to 6,100 within a few years.

An official from Sheldrick Wildlife Trust, a UK-based NGO, said that up to 36,000 elephants were being killed annually and without action, none would be roaming free in the wilds by 2025.

In some countries such as Sierra Leone and Senegal, elephants have already been driven to extinction, the official added.

There is a great demand for ivory in China, where a rapidly growing middle class seeks carved ivory as status items and good luck charms. Ivory is transported to Asia through a highly-organised criminal network, often via intermediaries in West Asia and south-east Asia, experts said.

Avinash Basker, a lawyer with the Wildlife Protection Society of India, a non-profit, said though India was not a major ivory market like China or Japan, here also elephants continued to be poached.

In India, an individual has to get an ownership certificate to possess an ivory item. Deviation from the norm can attract punishment up to three to seven years, Basker added. On the other hand, China, Japan and Thailand have domestic trades which affect the elephant population worldwide.

“CITES (The Convention on International Trade in Endangered Species of Wild Fauna and Flora) has limited mandate, the laws are nearly not as strong as they should be. So long as a national market or a domestic market exists in (certain) countries, international banning is futile. More agreements on national utilisation are required,” he added.

Compared to China, India has a very small-scale market for ivory. Ivory bangles and idols are common in weddings and festivals, but other than that the country does not have the potential to become a leading ivory market. “If elephants are lost, ecological harm is inevitable as it will affect forests and the environment gravely,” he said.