In turn, industries and investors got land, mining leases and concessions from the state government 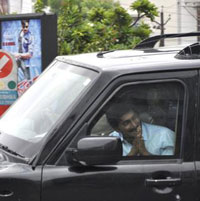 The Central Bureau of Investigation (CBI) has disclosed that Y S Jaganmohan Reddy, popularly known as Jagan, accepted Rs 1,172 crore from various investors as bribe and in turn helped them get favours from the state government. The favours are mainly land, mining leases and licences for new industries. Jagan, Member of Parliament from Kadapa and late chief minister Y S Rajasekhara Reddy’s son, was arrested by the investigating agency on May 27 in connection with a disproportionate assets case. A CBI special court in Hyderabad on May 28 remanded him to judicial custody for 14 days. He will remain in the Chanchalguda Central Prison till June 11.

According to CBI, Jagan, president of the YSR Congress Party, amassed huge wealth during 2004-2009, when his father was the chief minister. Jagan’s declared assets were Rs 1.7 crore in 2004. It shot up to Rs 77 crore in 2009 and then to a whopping Rs 356 crore in 2011. As per the investigating agency, Jagan misused his father’s office to grant favours to industries and individuals. In turn, they invested in Jagan’s businesses including Sandur Power Company, Janani Infrastructure and Jagati Publications which brings out Sakshi, a Telugu daily.

The investigation into Jagan’s wealth by CBI started in August last year following a direction by the Andhra Pradesh High Court. The court was acting on a petition filed by a ruling Congress member of the legislative assembly P Shankar Rao. CBI in its First Information Report (FIR) has named 73 firms and individuals in connection with the case, apart from Jagan as accused number one and his financial advisor V Vijay Sai Reddy as accused number two. A few industries like Aurobindo Pharma, Hetero Drugs, Trident Life Sciences and Ramky Pharma India Limited, Penna Group, India Cements and Dalmia Cements have also figured in the chargesheets and the remand report submitted by the investigating agency in the court. The individuals named in the chargesheets include industrialist Nimmagadda Prasad, promoter of Vodarevu and Nizampatnam Port and Industrial Corridor (Vanpic), Y Vijaya Lakshmi Prasad, general manager of Andhra Pradesh Industrial Infrastructure Corporation (APIIC) and senior IAS officer B P Acharya and G Venkataram Reddy, a former vice-chairman of Visakhapatnam Urban Development Authority (VUDA).

According to CBI, in many instances the government–owned APIIC acquired cultivable land from farmers for developing industrial parks and special economic zones, and then gave it to investors, a quid pro quo for their investments in Jagan’s company. For instance, APIIC gave 5,260 hectare (ha) in Guntur and Prakasam districts to Nimmagadda Prasad for Vanpic project by doctoring the terms of the concession agreement. Prasad had invested Rs 854 crore into firms owned by Jagan through his companies Alpha Villas and Gilchrist Investments. Besides Vanpic, he was also given several concessions under the Stamps and Registration Act, alleges CBI. Farmers who lost their land-holdings to Vanpic are still protesting against forcible acquisition of land. Prasad was arreasted by CBI on May 15.

Aurobindo and Hetero groups were allotted more than 60 ha on lease at Rs 17.5 lakh a ha in the green industrial park of APIIC at Jadcherla in Mahbubnagar without proper assessment of requirement of land, says CBI.  The transaction resulted in a loss of Rs 12.26 crore to APIIC as the rate fixed by the Price Fixation Committee of the government ranged from Rs 37.5 lakh-50 lakh a ha. Around 12 ha of land at the Export Promotion Industrial Park at Pashamylaram in Medak were transferred to Trident Life Sciences Limited by falsely representing that it was a 100 per cent subsidiary of Aurobindo Pharma. Otherwise, the deal was not allowed as per APIIC rules.

In another instance, Ayodhya Rami Reddy, promoter of Ramky Pharma , which is implementing a pharma city over 971 ha in Visakhapatnam, wrongfully gained around 370 ha, and made a gain of Rs 133 crore from selling this plot.  Ramky had invested Rs 10 crore in Jagati Publications as a quid pro quo for the benefits it secured.

The long list of firms in the FIR consists at least four big cement companies. Chennai-based India Cements, Hyderabad-based Penna Cement Industries, Dalmia Cements and Bharati Cements, the one promoted by Jagan himself.

According to CBI, the state government had in 2008, accorded permission to India Cements, to draw around four million litres of water per day, including 101 million litres of water already permitted from Krishna River. In another instance, the company was granted extension of lease of land for a further period of 25 years from July 2003 to June 2028. The second reference was related to a 1.05 ha land, which was given to the company to construct an infiltration well with a pump house for pumping out water to the cement plant for 20 years.

In the case of Penna Cements, CBI points out, the company's promoter P Pratap Reddy, is a confidant of Jagan’s father. Acording to the investigating agency, while Pioneer Infrastructure Holding Limited, represented by Pratap Reddy as its director invested Rs 23 crore in Jagan’s Carmel Asia Holdings Private Limited and Rs 45 crore in Jagathi Publications, the Penna group received an allotment of government land, fresh limestone mining leases and transfer of the existing mining leases to the extent of 1,214 ha through various government orders among other benefits. The government in 2007 entered into a memorandum of understanding with ANRAK for an aluminum project in Visakhapatnam district for which Andhra Pradesh Mineral Development Corporation (APMDC) is supposed to supply bauxite. ANRAK is a joint venture by Penna Cements and Government of Ras al Khaimah from United Arab Emirates.

Jagan is charged with criminal conspiracy, criminal breach of trust, cheating, forgery, using of forged documents as genuine and abuse of official position under various sections of Indian Penal Code (IPC) and the Prevention of Corruption Act.

Quite expectedly, he denies all the charges against him and alleges the arrest is an outcome of political conspiracy by the ruling Congress from which he broke away last year and formed his own political outfit. He says the arrest is an attempt to keep him away from the scene when a crucial bypoll to 18 assembly seats and one Lok Sabha seat is around the corner. Elections are scheduled to be held on June 12.

The CBI special councel, Ashok Bhan told the court that Jagan could no longer project himself as a victim of political vendetta. “He had robbed the assets of the state that would have been otherwise used for the welfare of the poor,” he stated in the court. The agency has accused Jagan of having Hawala transactions.

Interestingly, the irregularities are the outcome of the decisions taken by the Congress government led by YSR Rajasekhara Reddy then. Many of YSR’s colleagues are still serving as ministers in the present Kiran Kumar Reddy’s government. Some of them have been already questioned, and one of them, Mopidevi Venkataramna, was arrested by CBI on May 24.

The Supreme Court in March has sent notices to six ministers and eight bureaucrats asking their explanation about their alleged roles in issuing 26 controversial government orders issued during YSR’s period. Most of them are related to land allotment.