What do people do when their livelihoods are threatened? How do they deal with a world that pushes them to the margins? Such issues were raised by nine documentaries at Jeevika 2003 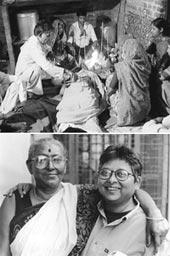 What do people do when their livelihoods are threatened? How do they deal with a world that pushes them to the margins? Such issues were raised by nine documentaries at Jeevika 2003.

Shohini Ghosh travels with four sex workers of Calcutta to explore a world which had always aroused her curiousity as a child. In so doing she presents, in The Tale of Night Fairies, a powerful argument to decriminalise adult sex work. Jyoti Patil's Liquor vs Living questions ways in which society labels certain practices as illegal while to trying to understand the effects of an anti-liquor movement on a community that lives on manufacturing liquor. In Turf Wars, Sanjay Barnela and Vasant Sabherwal engage us in debates on the politics of conservation. Liquor vs Living and Turf Wars provoke questions rather than provide answers to problems that are inevitably complex.

The festival showcased different film-making styles. Rahul Roy uses the docu-drama format in The City Beautiful to narrate the tragic-comic tale of two families trying to make sense of constant poverty and deprivation. Shri Prakash's The Fire Within is a historical narrative about effects of 150 years of coal mining upon tribals in Jharkhand. Meera Deewan uses the same technique in Backstage Boys to map the century-old tradition of emigrating to the West, that exists among Punjab's marginal farmers. Three films employ the technique of a chronicle: Reena Mohan's A Group Portrait about women in Bihar's Muzaffarabad district transforming their traditional craft of sujni into a viable livelihood option; Sanjay Maharishi and Anuradha Maharishi's Aruvacode Diary about a Kerala women's cooperative trying to find a place for pottery in the world of plastics; Arti Bhasin's Bamboo Children about making South Karnataka's Soliga tribals self-reliant. But the camera is not a passive recorder here; various protaganists are critically interrogated about their successes and failures.

The films provoke, arouse curiosities and shake many accepted notions. Centre for Civil Society should be complimented for providing a forum to them.