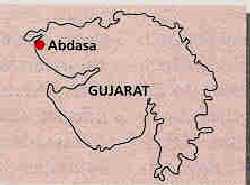 a private jetty caught in environmental litigation may receive a fresh lease of life, if a proposed change in the contours of the coastal zonation map for Kutch, Gujarat, sees the light of the day. The jetty is meant for the controversial Rs 664-crore Sanghi Industries cement divison in Kutch. It is being constructed in Khavthar bet (island) in Abdasa taluka, which is located in the ecologically-sensitive coastal regulation zone- i (crz-i), going by the available coastal zone map of Gujarat government. No construction is permitted in this zone within 500 m of the high tide line.

On August 2, at a meeting with the ministry of environment and forests (mef) appraisal committee, the state government representative claimed that the jetty did not come under crz-i, but crz-iii, according to sources. The latter is an area where the mef could approve construction within a distance of 200-500 m of the high tide line. Sources say that the Gujarat government has prepared a fresh map, claiming that the satellite data on which the earlier map was based, was interpreted wrongly.

Even as the permission remains in limbo, jetty construction had been going on. A team appointed by the high court under the chairpersonship of the state environment director inspected the area and submitted its report on May 6, 1996. According to the report, the following had been constructed between the high and the low tide lines: a 320 m approach road to the jetty, a 470 m earthen bund for a piled approach, another bund for the jetty and a temporary water pipeline.

Local non-governmental organisations have informed the mef appraisal team that mangrove forests in the area were being destroyed. However, the president of the cement division of Sanghi industries, S C Maloo, states, "The no objection certificate for the construction of the jetty has been obtained in principle from the Gujarat maritime board." He also claims that the very purpose of being alloted land for the purpose would be frustrated if the jetty were to be shifted beyond the 500 m mark of the high tide line, since sea-going vessels cannot travel beyond the low tide line.

All these arguments and counter-arguments may become irrelevant if state government officials have their way. According to sources, the Gujarat state forest and environment department's fresh map would presumably alter the location of lines and forests.

While the matter as to whether or not the jetty is endangering its surroundings is subjudice, on August 26, the mef appraisal team is going out to ascertain the environmental status of the area. It would be interesting to watch whether the mef will accept a revised interpretation of the area's topography.