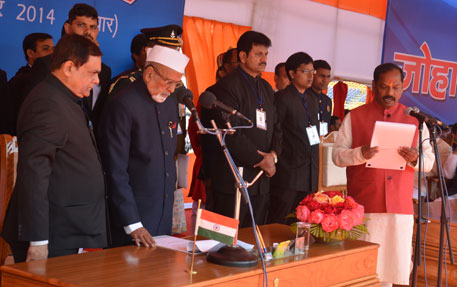 After Bharatiya Janata Party’s decisive victory in Jharkhand, Raghubar Das was sworn-in as the first non-tribal chief minister of the state on Sunday amid protests by tribal groups.

There was widespread speculation that Bharatiya Janata Party’s (BJP’s) decision to crown a non-tribal as the chief minister of Jharkhand would lead to massive protests. But the two-day bandh called by Sarna Prathna Sabha, an umbrella body of 16 tribal organisations, failed to evoke much response from people.

The new chief minister convened a cabinet meeting barely few hours after the swearing-in ceremony at Mohrabadi Ground in Ranchi.

Prime Minister Narendra Modi who was supposed to attend the swearing in tweeted: “Was to travel to Jharkhand to attend the oath taking ceremony of Shri Raghubar Das but am unable to do so due to weather conditions.”