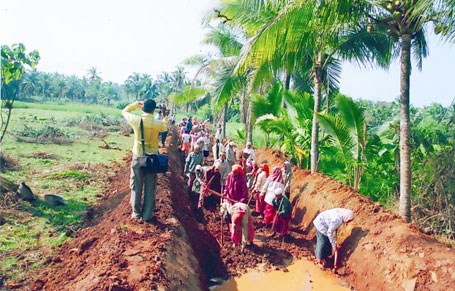 Facing dipping demand for works under the Mahatma Gandhi National Rural Employment Guarantee Act (MGNREGA), the Jharkhand government has decided to form unions of workers that will persuade people in villages to ask for more work. The state will be the first in the country to do so.

The initiative was approved by the State Employment Guarantee Council, the state-level governing body for MGNREGA, in its meeting in September.

Those who have work for at least 15 days under MGNREGA will be eligible to be members of the union. The unions will be a registered body, though, it is still not clear under which laws. The unions will be formed at the village, block and district levels. “The unions will get incentives to pursue villagers to work for 100 days as guaranteed under the rural employment programme,” says Ajay Kumar Singh, the state commissioner for MGNREGA.

Work demand under the employment programme is decreasing in the state. MGNREGA is a demand driven legislation. It guarantees 100 days of work. But out of the state's four million job card holders, only half of them demanded jobs in 2010-11. This fiscal year (till September 2011), only one million job card holders have demanded employment. “What worries us is the average days of work provided to each household. It is just 25 days this year,” says Singh. Last year the average days of employment was 50 in comparison to the 100 stipulated days. According to a member of the council, reducing demand has restricted the number of village assets that can be created under the programme. “We aim to increase the number of work days immediately. That is the reason for the new initiative,” explains Singh.

The scheme will give a cash incentive of Rs 50 to the union for each household completing 100 days of works. The money earned will be used by unions for welfare of the local workers of the MGNREGA. Going by the details of the scheme yet to be published, the unions will have the prime responsibility of encouraging villagers to demand more works. They will use the incentive of creating productive village assets like ponds and dug wells to trigger people’s interest.

“We expect that by creating a local platform for canvassing support for MGNREGA, we will help in streamlining the village planning process as well,” says a member of the council. Village planning for works is mandatory under the employment guarantee programme. Currently, hardly any village does any planning due to lack of awareness and also participation of people. With elected panchayats in place now, the state feels that the unions will help the elected members to focus on village planning.

Jharkhand came under severe criticism from central government for non-implementation of MGNREGA. Jairam Ramesh, the rural development minister, during his visit to the state on October 8 said, “Jharkhand could spend only Rs 1,558 crore on MGNREGA programmes, though it can spend Rs 5,000 to Rs 6,000 crore as it is a demand-driven programme.” KB Saxena, professor of Social Justice and Governance, Council for Social Development, a Delhi-based think tank, says, “MGNREGA is in a bad shape in Jharkhand. People's interest in it is definitely not that encouraging.” He recently visited the state to take stock of the programme at the request of the Planning Commission.
Web Specials Web Specials Web Specials Worker unions Rural Development Planning Commission Planning Commission Panchayats Mahatma Gandhi … Mahatma Gandhi … Job cards Jharkhand Jairam Ramesh Employment programme Council for Social …
SUPPORT US