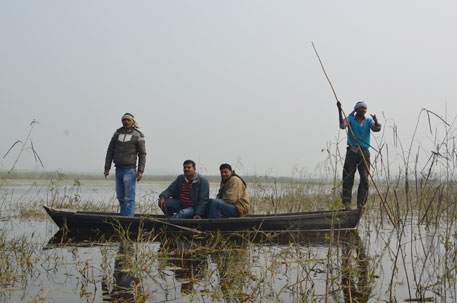 Once a haven for migratory birds, the Kanwar lake in Bihar, Asia’s largest freshwater oxbow lake, is today a dying wetland ecosystem.

A recent meeting on “Wetland Governance in South Asia”, held in Delhi, discussed whether this lake can be saved if it is declared a Ramsar site.

Kanwar jheel, as it is locally called, is located 22 km north-west of Begusarai town. It is a residual oxbow lake, formed due to meandering of Gandak river, a tributary of Ganga, in the geological past.

Kanwar lake was declared a notified area under the Wildlife (Protection) Act of 1972. To check poaching of birds, it was declared a protected zone by the Bihar state government in 1986; the government of India declared it a bird sanctuary in 1989. The authorities had notified 15,000 acres (one acre equals 0.4 ha) in the area as wetland, which makes it six times bigger than Kaladeo National Park in Bharatpur, Rajasthan—another  well-known bird sanctuary of India.

But the legal protection accorded to the wetland seems to have been of little help. It is shrinking fast. The lake covered 6,786 ha in 1984, which reduced to 6,043.825 ha in 2004. By 2012, the lake area had reduced to a mere 2,032 ha, according to a study led by Ashok Ghosh, professor of environment and water management at the Anugrah Narayan College in Patna (see maps). 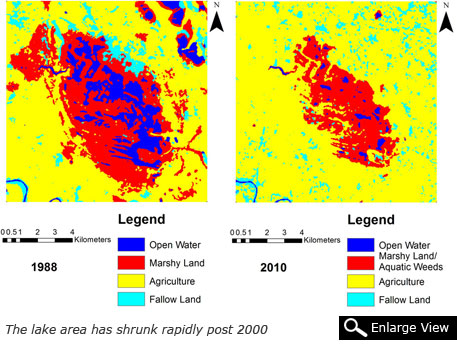 What’s more, water level in the lake has reduced, there is heavy siltation and eutrophication (when excess algae and plant growth and their decomposition deprive water of available oxygen, causing death of other organisms) has set in.

Till the 1980s, the lake was one of the largest breeding grounds for migratory birds. But now poachers and trappers have taken over, leading to a steep decline in bird population. Poisonous pesticides used in farming also pose a major threat to the birds in the area.

When contacted, district magistrate of Begusarai, Manoj Kumar, said he had recently ordered ban on sale/purchase of land around the lake after he received complaints about it. The Wildlife Protection Act 1972, does not allow any sale or purchase of land notified under this Act. Kumar clarified that even in case where the land is under private ownership, selling and buying is not allowed.

But besides banning land deals around the lake, the government seems to have given little thought to conserving the wetland.

Environmental lawyer Sanjay Upadhyay said if land near wetlands are illegally sold or bought, orders can be obtained from the courts to stop it. Upadhyaya has fought many court cases to save wetlands. He says strong regulation for protection of the wetlands is also needed to put a stop to land deals.

The district magistrate could not reply why buying and selling of land of the wetlands was going on unchecked in the first place. However, he says that the notification area (15,000 acres) ought to be reconsidered since many people have been living in the notified area for generations and have been raising objections

Local farmers want only 1,400 acres to be notified as wetland area. They also want the area to be developed as “krishi-evam-pakshi vihar”, where agriculture and development of bird habitat can be carried out in an integrated manner. On the other hand, the Sahnis—a class depending on the fisheries—want the canal connecting the lake and the river to be restored in order to restore their livelihood. This has brought them into direct conflict with farmers.

The catchment area of Kanwar lake has a northern part which is at an elevation and acts as a water divide. The Burhi Gandak river in the south and the west form the other catchment boundaries. There is a southern 15 km-long irrigation channel constructed in 1951 to drain the excess water for agricultural purposes; the channel connects the lake to the river Burhi Gandak.

Sanjiv Kumar Singh, president of Saviour Alluvial Ecological Establishment (SAEE) Society, a Begusarai-based non-profit, said the canal is all silted up and this has severely harmed the ecosystem and the fauna in the lake.  According to SAEE, massive inflow of silt is decreasing the depth of the lake. Every year, about 3.8 cm of silt is deposited in the Kanwar lake. Ghosh said non-maintenance of the canal has choked it up and hence increases the chance of flooding in the area. 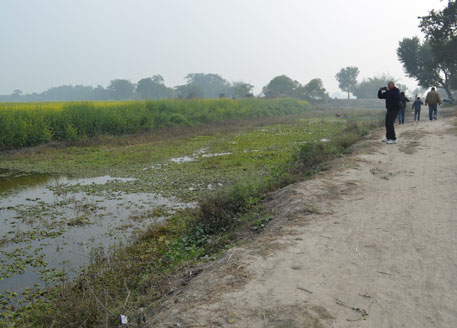 According to the researchers, the ecosystem of the lake and the water canal need to be revived soon. Ghosh explained that the lake has been shrinking at an abnormally high rate, as revealed by a comparison of remote-sensing pictures taken in 1984 and 2004. Ghosh added that that the depth of water in the lake now is only a few metres, and hence, the wetland has almost been converted into marsh land. Weeds have spread across the marshy wetland, leading to the loss of lake’s natural biodiversity. Ghosh added there is no inflow-outflow mechanism existing in the lake right now. Extensive deforestation, overgrazing, unsustainable agricultural practices, and over exploitation of biomass for fuel, fodder and timber purposes have stripped the land of its natural vegetation cover, resulting in erosion. The lake bed has been encroached extensively by the rich farmers.

Sumit Anand, a researcher on remote sensing and loss of wetlands, said that the amount of water in the lake is declining at an alarming rate due to severe eutrophication. The lake is threatened by pollution and effluents released by the local inhabitants, causing drying and choking of the inlets of the lake. The water of the lake has become turbid and acidic in nature. Due to this, the use of the water by the local people has resulted in skin and digestive disorders among the inhabitants. Anand added that over exploitation of the sanctuary area is harming and destroying the natural resources.

Ghosh said that there is urgent need for intervention to save this lost paradise. Funds are available with the state government, he added.

Singh said the entire notified area should be saved, and added that reconsideration of the size of the notified area should be done as the present sanctuary area also included the residential areas existing long before the notification came into place. The researchers said a comprehensive management of wetland and its buffer zone should be taken up involving active participation of the stakeholders. A strong legal framework is needed for the protection of this notified area said environmental lawyers. For this mapping of the original extent of the lake needs to be undertaken and then notified.