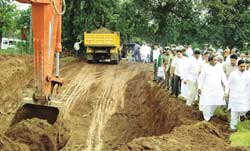 karanataka is constructing a canal as part of the Kalasa-Bandurinala irrigation project on Mahdei river without waiting for the Centre's clearance. This has brought about a lot of controversy.

Karnataka claims that it is using state funds for the project. Being a Non-Plan expenditure, the need for prior permission does not arise. It further argues that the Centre has no constitutional or statutory authority to restrain it from undertaking irrigation projects. As an example it cites the Centre's refusal to interfere in the Telugu-Ganga and Srisailam projects of Andhra Pradesh, which utilises the surplus water of the Krishna basin.

But according to environmentalists, Karnataka's excuse is just a ploy to continue with the project."The Union environment and forests (moef) minister has reportedly written to the Karnataka chief minister on October 16, cautioning against the project, as it is yet to receive forest clearance. The Kalasa project will destroy 258 hectares (ha) of reserve forest, whereas Bandurinala project will consume another 224 ha," says Shrihari Kugaji, secretary of the Belgaum-based ngo, Paryavarni. The Karnataka government claims that currently it is carrying out works in the non-forest parts of the canal route and will seek moef's clearance before entering the forest areas.

In November 2001, moef carried out an inspection of the proposed project site, following which it declined to give the project a clearance untill the inter-state dispute between Karnataka and Goa was resolved (see, 'Waylaid' Down to Earth, October 31, 2006).

Besides, Karnataka officials, too, refuse to acknowledge that they received any communication on the matter from the Centre. On contacting the state chief minister's office, this correspondent was directed to check with A K Naik, principal secretary, water resources department, regarding the Centre's letter. But the latter feigned ignorance.