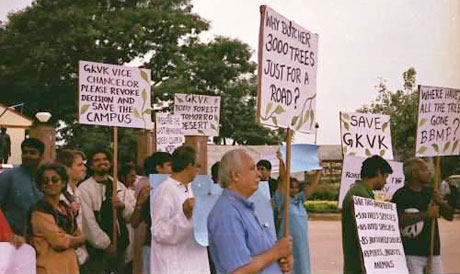 The Karnataka High Court has stalled the construction of a link road passing through the ecologically sensitive forest on the campus of the Gandhi Krishi Vignana Kendra (GKVK) of the University of Agricultural Sciences in Bengaluru.

The bench headed by Chief Justice J S Khehar directed Bengaluru's civic body, Bruhath Bangalurur Mahanagara Palike (BBMP), to stop construction of the 3.90 km link road passing through the campus. The court gave the order on the ground that no environmental impact assessment (EIA) was carried out for the project and directed the state government to form a high-level committee to examine the matter.

In its ruling dated September 12, the bench said the high-level committee should comprise of the chief secretary of the state, the secretary of the department of agriculture, the secretary of forest, ecology and environment, two representatives nominated by the University, two representatives nominated by BBMP and two experts on the subject nominated by the Indian Institute of Science for resolving the controversy. “Till the committee takes a decision, BBMP shall not proceed with further construction of the link the road,” the order says.

The decision follows a public interest petition filed by seven former vice-chancellors of University of Agricultural Sciences at Bengaluru, led by R Dwarkinatha, the university’s employees and alumni association and non-profit Environment Support Group. They challenged the construction of the road linking Yelahanka road and the Bellary road.

The petitioners said the forest spread over 558.5 hectare (ha) of GKVK campus is a declared as a Heritage Site under the Biological Diversity Act of 2002. The campus has a rich biodiversity, which includes 530 plant species, 165 bird species, 10 reptile species and 13 mammal species. They alleged that the link road would adversely affect the flora and fauna of the campus and also various research programmes. They stated that much of the university land is forestland and the link road would violate several laws. Besides, the proposed link road is also not in conformity with the master plan 2015 of Bengaluru.

BBMP argued that the university had created the problem by closing the roads leading to different villages surrounding its campus. This led to protests by the residents of Thindlu, Hattur, Vidyaranyapura and other surrounding villages; they demanded a new road. BBMP then requested the university to transfer the land and the latter handed over possession of 9 ha of land on September 5, 2009, for building the 24 metre-wide double lane road.

The civic body pleaded it should be allowed to go ahead with the construction as the road is nearly 60 per cent complete and Rs 15.19 crore has been spent on it. The total cost of the link road is estimated at Rs 27.16 crore.

The petitioners, however, claimed that the University in its statement of objections dated December 16, 2009, opposed the project. Following the controversy, the high court had formed an expert committee in January 2010 to examine the rival claims. The expert committee said the road will adversely impact the biodiversity of the forest. The panel added that it was difficult to make an exact quantitative assessment of the long-term effects of vehicular pollution on biodiversity and ongoing research activities. The committee suggested connecting the four existing roads in the locality, instead, to ease traffic.

Leo Saldanha of Environment Support Group says the ruling implies that the precautionary principle, which is the basis for the EIA studies, must guide decisions relating to infrastructure projects like road building. The Environment Protection Act, in particular the EIA notification, demands project development must be based on public consultations and EIAs. But these statutory requirements are commonly flouted by urban authorities resulting in irreparable damage to the environment and seriously jeopardising the interests of project-affected-communities. “This ruling now puts to rest any doubt that remains about the need for participatory, ecologically and socially sensitive decision-making in urban infrastructure projects,” he says.